The rendered design retains all the original body panels of the Opel Rocks-e electric quadricycle but adds a lot of elaborations to the design.Wide fender add-ons make the car look like an off-road go-cart.
By : HT Auto Desk
| Updated on: 12 Sep 2021, 03:57 PM 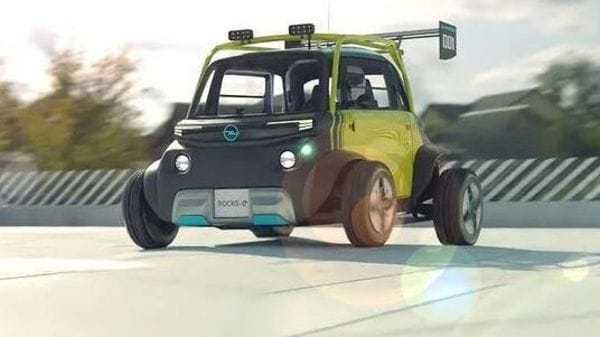 A rebadged version of the Citroen Ami fully electric heavy quadricycle, the Opel Rocks-e was unveiled just about two weeks ago. And now, an industrial design student Lukas Wenzhöfer, has decided to take the Rocks-e to a whole new level with his rendering of the nano electric car. In the rendering, the vehicle is called Opel Rocks e-xtreme and features extreme looks as well.

The Rocks e-xtreme comes with quirky looks with rugged off-road tyres, just like real-life toy car. While posting the rendering on his Instagram account, Wenzhöfer wrote, "The new Opel Rocks-e is quite polarizing, to begin with, so why not go completely mad?"

The designer retained all the original body panels of the Opel Rocks-e but added a lot of elaborations to the design. He added rugged off-road tyres to the petite vehicle, making it look quite dramatic. Then there is raised suspension and ultra-wide tracks. Then there are wide fender add-ons that are not enough to cover the wheels that are protruding from the four corners of the car like an off-road go-cart.

Inside the cabin, a tubular structure was added on top of the greenhouse in order to protect the inside in case of an accident. The massive rear wing could also sustain most damage as it sticks out several inches above the car’s roof.

The original Opel Rock-e comes equipped with an 8 hp electric motor and a 5.5 kWh battery pack. And though there is no revelation of the powertrain on the rendering version, it is expected that the e-xtreme version would be fitted with an upgraded powertrain in order to better match its character.