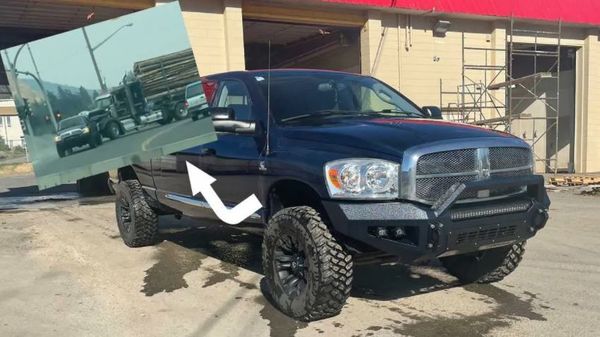 This is the mighty Dodge Ram pickup truck that towed the semi-truck. (Image: Motor1)

Last week a video from British Columbia of Canada emerged on the internet showing an old Dodge Ram pickup truck towing a fully loaded semi-truck. Many people were astonished seeing the video, while some expressed doubts.

However, the video appears to be genuine. The loaded logging truck broke down in an intersection and the third-generation Dodge Ram pickup truck towed it out of that place.

Now more details about the incident and the mighty Dodge Ram pickup truck have surfaced online. It was a 2007 Dodge Ram 3500, powered by a stock 5.9-litre Cummins diesel engine clubbed with a manual gearbox. As it has been revealed, the pickup truck is running fine despite towing that mammoth semi-truck. The manual gearbox appears to be working fine but the clutch life might be a bit shorter now.

The pickup truck driver has reportedly told to Motor1 that he just wanted to help the semi's driver. He said that he pulled the semi-truck once to get it out of gear so the logging truck's driver could start it. The pickup truck is claimed to had towed the large truck for around 1.5 kilometres.

The white smoke that was visible in the original video was probably from the slightly damaged clutch of the pickup. As the driver said, the overhitting was becoming a problem for his vehicle. "There's a possibility that I might have to replace the clutch earlier than expected," he said.

Interestingly, pickup trucks pulling way larger vehicles than them is nothing new to us. We have previously seen an electric Ford F-150 prototype towing a one million pound train. Toyota too made a commercial, where a Tundra pickup truck was towing a 300,000 pound Space Shuttle.