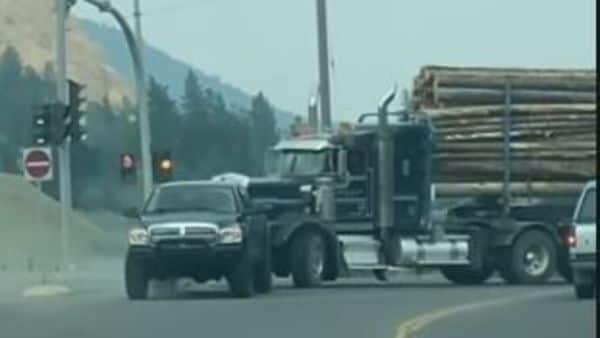 The pickup truck was seen towing a semi-truck loaded with logs on July 10 in Canada. (Image: Youtube/Viralhog)

Pickup trucks prove their mettle in many tough situations. These muscular 4x4 pickup trucks can act as capable tow vehicles as well. A 30-second video clip has emerged on the internet showing a Dodge Ram towing a massively loaded logging semi-truck. That was enough to cheer up the Dodge Ram and pickup truck lovers.

The video is from Williams Lake, British Columbia, located in Canadian Rocky Mountains. The video shows the older Dodge pickup is towing the logging rig from an intersection, where it reportedly broke down. The logging truck was not only fully loaded itself, but it also had tandem trailers fully loaded as well.

According to tractor-trailer regulations in British Columbia, the maximum allowable weight for such a rig is 63,500 kilograms. While the details of the pickup truck are not available, it looks like a third-generation Dodge Ram. It was probably built between 2002-2008. The pickup is probably a 2500 model, if not a one-ton 3500 one.

An aftermarket front bumper is visible in the footage, while lifted suspension setup and chunky tyres are there as well. However, these modifications are absolutely nothing when towing 63,500 kg weighing logs and a semi-truck.

The video shows white smoke billowing from underneath the vehicle. This could be coming from the passenger rear wheel of the pickup truck. However, the angle of the video makes it difficult to tell the exact source of the smoke. It could come from the gearbox as well if this specific Dodge pickup was a manual variant. From that, you can imagine the amount of pressure the gearbox was under while towing the semi-truck with its massive amount of cargo.

The Dodge Ram was probably powered by a 5.7-litre Hemi V8 engine. This engine is capable of churning out 345 hp of power output and 508 Nm of massive peak torque as well.