Home Auto News This Ev Startup, Rival To Tesla, Is Now Worth More Than Ford And Gm

This EV startup, rival to Tesla, is now worth more than Ford and GM 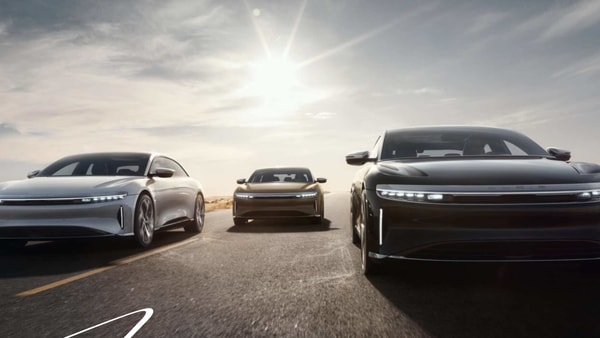 California-based electric vehicle manufacturer Lucid's valuation has gone up to nearly $100 billion, making it more valuable than legacy carmakers like Ford Motor and General Motors, the two among the big three in Detroit. Lucid has added more than $17 billion to its valuation on Tuesday as its shares jumped nearly 25 per cent.

Lucid, which has come out with its first ever electric car to rival Tesla, world's largest EV manufacturer. Lucid's worth is now more than $91 billion, compared to $79 billion of Ford Motor and $90 billion of General Motor. Lucid's shares saw quick rise on Tuesday after the EV maker said it aims to produce 20,000 electric vehicles next year.

On Monday, Lucid had said that it has received more than 17,000 bookings for its first electric car after hitting 13,000 by September 30. Lucid now has bookings worth more than $1.3 billion. The EV maker uses a facility in Casa Grande in Arizona to manufacture its electric cars. The facility was built in less than a year's time and began operating last year.

Lucid's first luxury electric sedan Air Dream Edition has received an official range rating of more than 830 kms, making it the longest-range electric vehicle in the United States. US Environmental Protection Agency rated the Lucid Air Dream Edition with an official range of 520 miles (823 kms) on single charge. It is nearly 200 kms more than its rival Tesla Model S Long Range, which has 651 kms of range.

Lucid is considered as a rival to Tesla because of its claims to build electric cars with world-beating ranges. Lucid has demonstrated battery technology that can rival the performance of the market incumbent’s vehicles. The carmaker made its debut on the Nasdaq in July after a merger with a company backed by Wall Street dealmaker Michael Klein.

Lucid began production of its electric cars in September while the deliveries started on October 31. The company aims to deliver around 600 units of the Dream Edition Air sedan.