Aston Martin badly needs a savior. With a string of profit warnings, lackluster sales and dwindling financial reserves weighing on Aston Martin’s stock, the job of Lawrence Stroll has become tougher.
By : Bloomberg
| Updated on: 09 Feb 2020, 10:32 AM 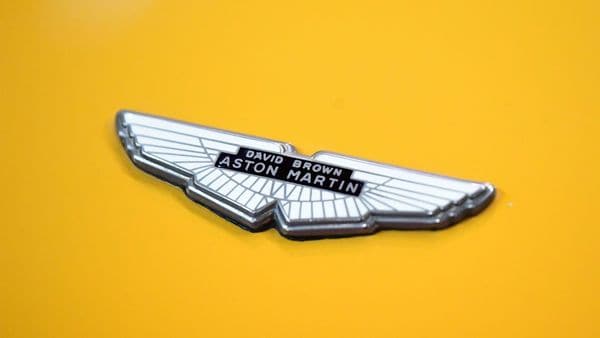 A photograph taken on February 4, 2020 shows the Aston Martin logo on a displayed car during the Retromobile classic car show at Porte de Versailles, in Paris. (Photo by MARTIN BUREAU / AFP)

In a career spanning more than three decades, Canadian fashion mogul Lawrence Stroll has relied on a simple formula: take over a brand that’s either niche, or in trouble, or both, and beef it up for half a dozen years. Then exit with a tidy profit.

It’s a skill he honed in the 1980s bringing Ralph Lauren’s preppy New England look to Europe, before buying Tommy Hilfiger in 1989 with long-term business partner Silas Chou -- another clothing brand that celebrated Americana with its blue-red-white emblem and country-club attire. Add to that list Michael Kors, teetering on the brink of collapse when the duo picked it up in 2003. By the time Stroll and Chou sold out in 2011, Kors was the king of affordable luxury with a sky-high valuation.

Now Stroll wants to prove he can replicate that approach in a very different field, one where investments are higher, regulation is fiercer and competition is more unforgiving. Last week, U.K. sports-car maker Aston Martin Lagonda Global Holdings Plc secured a 500-million-pound ($656 million) lifeline from a group that included Stroll, who is set to become executive chairman of the brand best known as the vehicle of choice for James Bond.

Aston Martin badly needs a savior. At the time of its initial public offering late in 2018, the business was pitched as a peer to Ferrari NV, which had pulled off a highly successful listing three years earlier. But the comparison quickly evaporated, with a string of profit warnings, lackluster sales and dwindling financial reserves weighing on Aston Martin’s stock, which has lost 75% of its value.

“Perhaps a touch of irrational mad passion with a large wallet isn’t as crazy as it sounds," said Matthias Schmidt, an independent automotive analyst in Berlin.

While Stroll hasn’t laid out his plan for Aston Martin in public, the stakes couldn’t be higher. The company has huge financial outlays, having pinned its turnaround on the success of its first SUV, the $189,000 DBX.

The DBX is Aston Martin’s bet that it can broaden its clientele from buyers of sleek sports cars like the entry-level $150,000 Vantage, which has turned out to be a tough sell. Aston Martin is also different from Stroll’s previous investments because the company is listed, meaning any turnaround happens under the glare of public ownership and the reporting requirements this brings.

“Stroll brings a number of important benefits, namely he has removed the urgent cash need of the business, allowing it to focus on building its brand rather than selling units to fund working capital," said Angus Tweedie, an analyst at Citigroup Global Markets in London.

Even though the DBX pushes into a crowded niche of luxury SUVs, early orders for the model have been encouraging. That success now gives Stroll and the team some breathing space to relieve pressure from other models, said Giulio Pescatore, an analyst at HSBC in London. At the same time, Aston Martin would be wise not to pursue a single-model strategy, he said.

“The DBX on its own cannot carry the weight of the company," Pescatore said.

Deliveries of the model begin in May, according to Aston Martin.

Stroll, who declined to be interviewed for this story, wasted little time resetting Aston Martin’s priorities. The carmaker said it’s paring back big-ticket investments in new models to focus instead on easier-to-achieve projects such as the DBX and special editions that tend to cost millions.

Aston Martin also put on hold its plans for an electric model, a counter-intuitive move in an environment where most other carmakers are going all-in with battery-powered vehicles. Unlike the world of fashion, the car industry has years-long research and development cycles that require extensive investments, and Aston Martin’s decision to jettison its electric ambitions may put it at a technological disadvantage.

For Stroll, the Aston Martin rescue package gives his team as much as 20% of the company. It also combines two of his big passions: corporate turnarounds and high-powered automobiles. Stroll’s successes in the fashion industry made him a billionaire, worth about $2.5 billion, according to the Bloomberg Billionaires Index. He owns an extensive car collection that includes rare Ferraris, as well as his own Formula 1 race-car team. (Chou, who is part of the Aston Martin consortium, is worth at least $2.8 billion.)

Born Lawrence Sheldon Strulovitch in Montreal in 1959, Stroll today enjoys the good life. Last year, the tabloid press was full of pictures from his Great-Gatsby themed birthday bash on the Italian island of Capri. Guests included Michael Douglas and his wife, Catherine Zeta-Jones. Stroll has homes dotted around the globe, from Switzerland to the island of Mustique.

Stroll’s past successes in fashion relied in no small part on dramatically extending the product portfolio to make the brands more widely accessible. In the case of Michael Kors, that meant adding popular accessories like sunglasses or handbags to the core range of clothing. Investors have speculated that Stroll may also take Aston from being an automobile company to a luxury consumer brand, an extension whose profit contribution remains untested beyond small items like key rings or T-shirts.

Even before Stroll showed up, Aston Martin Chief Executive Officer Andy Palmer sought to create a lifestyle offering that includes cashmere scarves and leather bags, as well as partnerships ranging from the luxurious (a real-estate development in Miami) to the ludicrous (a mini submarine called Project Neptune). The positive impact on the bottom line is questionable, at best: today, Aston Martin sunglasses and T-shirts can be had for 75% off their sticker price at discount chains.

Stroll’s arrival will reinforce Aston’s luxury pedigree, Palmer said in an interview last week. “I think the dialogue will change from automotive to luxury."

“The investment by Stroll reinforces our luxury pedigree, and also underlines the confidence the consortium has in the brand," Palmer said.

Whether Stroll will show longer investment stamina in cars than in fashion remains to be seen. In 2018, he led a group of investors to lift the Force India Formula 1 team out of administration. Renamed Racing Point, the U.K.-based team now counts among its drivers Stroll’s 21-year-old son, Lance, who finished 15th in the 2019 drivers’ championship. Despite pumping about $118 million into the team, it ended up in seventh place in the championship. Still, since F1 cars are designed the year prior, 2020 will be the true test of Stroll’s foray, according to Formula Money, which tracks the business of F1.

“Most F1 owners don’t invest in F1 to make money," said Caroline Reid, the publisher Formula Money. “For most team owners, F1 is a marketing exercise. Most usually, it’s a good way to promote road cars."

That could be an important extension for Aston Martin. As part of the deal, Stroll’s F1 team will become the Aston Martin Team in 2021, for a 10-year term. For teh carmaker, which has gone bust 7 times over the decades, its another attempt at a turnaround in rapid succession.

Fans of the brand now can look forward to not just the latest Bond movie this year, but can hope for a new investor who will display a more lasting commitment than the live-and-let-die approach of Stroll’s predecessors.