If you can't afford to own or drive a F1 car, chances are you won't be able to afford the Axsim Formula Simulator either. But it sure is as close as it can get to the thrill of a speeding machine.
By : HT Auto Desk
| Updated on: 16 Feb 2022, 04:42 PM 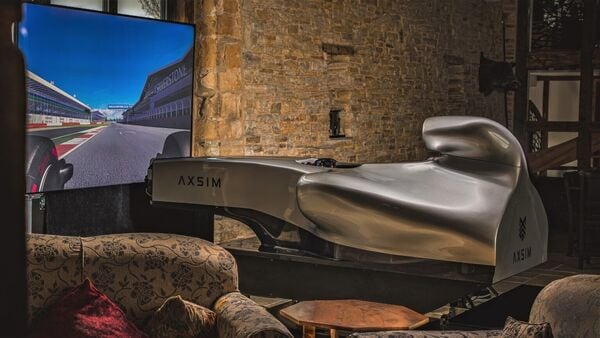 Would you shell out 100,000 pounds for a cutting-edge driving simulator that makes use of fighter jet technology to mimic G Force? Chances are that even if you had that kind of money, you'd rather spend it on a luxury Mercedes, Jaguar or Audi in the flesh. But then again the Axsim Formula Simulator isn't meant for everyone who can afford it but for those who may absolutely need it.

UK-based company Axsim Racing claims that its Formula Simulator  is ‘as close as you can get to the real thing' when it comes to driving some of the fastest cars in the world of motorsports. While pricing starts at 39,900 pounds (around ₹40 lakh), the top-of-the-line Full-Motion + G-Force costs 99,900 pounds (over ₹1 crore). Sure that is an insanely high amount of money to spurge on a simulator - a Mercedes S-Class in the UK starts at 76,000 pounds, but the Formula simulator brags about being one-of-a-kind.

The seats on the Full-Motion + G-Force Formula Simulator, for instance, packs unique pneumatic pressure modules. There are mutiple airbags that expand and contract to simulate the g-forces felt when cornering, braking and accelerating. The GPX steering wheel features a full-colour LCD display and a 25 Nm torque is achieved through a direct drive motor to clamp down on even an iota of latency. The hydraulic brake pedals are made from CNC machined aluminium while there is a six-point harness with quick-release buckle.

Watch two time “king of the hill” Robin Shute conquer a virtual @AC_assettocorsa #PikesPeak in our full-motion #FormulaOne Simulator during his visit to @CranfieldUni & @CranfieldAVEC… pic.twitter.com/vmn5LnjZV7

If that's not enough to give you a full feel of being inside a Formula 1 race car, there is attention given to high-quality audio as well. The simulator is kitted with dual KEF ultra-high-performance loudspeakers with 5mm high frequency tweeter and 165mm low frequency woofer - all placed with precision to put the user in the center of the action. There are also Rega amplifiers to further up the soundstage.

If the audio aspect is taken care of, the visual part could not have been far behind. Each of the Formula Simulator units is supplied with an external Samsung 65-inch 4K Ultra HD display. One can also opt for a larger screen - by up to 98-inches or a triple screen set up.

Axsim is further allowing prospective customers to choose a Formula Simulator in multiple colour options that include Red, Blue, Black, Yellow and Pink, among others.

Yes there is much to admire about this super expensive race simulator but before you think that there may not be many takers at the price point at which it is offered, think again. Many feel that F1 and F2 racers, alongwith those in other motorsport events like NASCAR and World Rally Championship, would take to practicing their art of driving when not out and about. Well, if their bank balance allows it, engines on we say.