Musk unveiled the Cybertruck in November and pitched it as a radically different option from the highly lucrative pickups produced by competitors.
By : Bloomberg
| Updated on: 25 Apr 2020, 08:17 AM 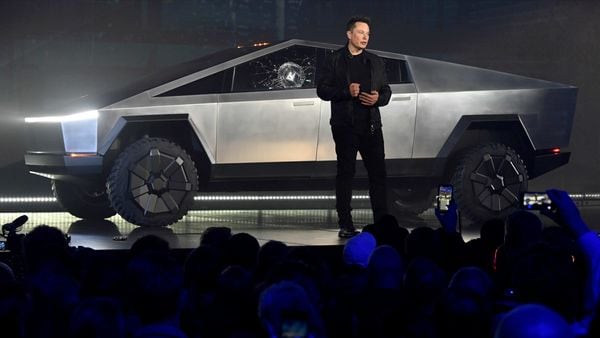 Elon Musk said Tesla Inc. will build its futuristic new Cybertruck in Texas regardless where the company decides to locate a big new “Giga" plant.

The company’s billionaire founder made the pledge on Twitter late Friday, noting that Tesla’s Fremont, California, factory is already at maximum capacity.

In March, Musk said Tesla is scouting locations to build both the electric pickup and the Model Y crossover for customers on the East Coast, likely triggering a state-by-state competition.

In a separate Twitter post late Friday night Musk says the company may provide updates on the Tesla Semi and Roadster models later this year.

Musk’s move to publicize Tesla’s plans to construct a new factory after U.S. President Donald Trump said the chief executive owed the country a manufacturing plant mirrors a strategy he used in 2014 to score a $1.3 billion incentive package from Nevada.

Musk unveiled the Cybertruck in November and pitched it as a radically different option from the highly lucrative pickups produced by competitors. A botched demonstration where Tesla’s design chief cracked supposedly shatter-proof glass generated enormous buzz and prompted the company to sell T-shirts featuring the broken windows.