Home Auto News Tesla Will Build Its Much Publicized Cybertruck At New Factory In Texas: Report

Tesla will build its much-publicized Cybertruck at new factory in Texas: Report

The Cybertruck has generated quite a lot of buzz since it was first showcased by Tesla CEO Elon Musk in November of 2019. It claims to have a performance of a sportscar with capabilities of a pickup truck - in an all-electric avataar.
By : Bloomberg
| Updated on: 16 May 2020, 08:46 AM 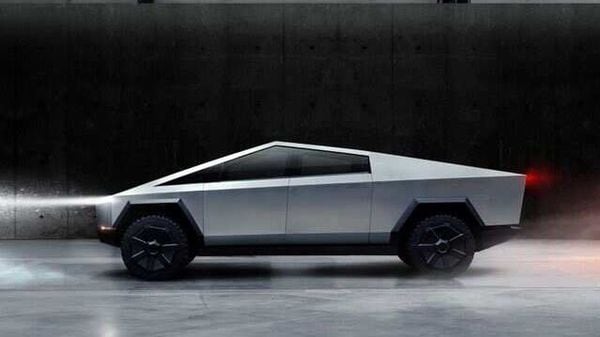 The electric-car maker will construct the plant in or near Austin, Electrek said. The Associated Press later reported that Austin and Tulsa, Oklahoma, are finalists for the facility but that no final decision has been made.

Elon Musk said in March that Tesla was scouting for sites where it will build both the in-development Cybertruck and the Model Y crossover for customers on the East Coast. The chief executive officer last week threatened to move the company’s headquarters and future programs to Texas or Nevada after a California county blocked the carmaker from reopening its factory in the San Francisco Bay area.

Tesla unveiled the Cybertruck in November, with Musk pitching it as a radically different option from the highly lucrative pickups produced by established automakers. A botched demonstration during which the company’s design chief cracked what was supposed to be shatterproof glass generated enormous publicity.

(Also read: Tesla Cybertruck may be able to float 'for a while', reveals Elon Musk)

Texas was among the finalist states for the battery factory that Tesla ultimately chose in 2014 to build near Reno, Nevada. The state of Nevada lured the company with a $1.3 billion incentive package.

Tesla employs roughly 11,000 workers in Fremont, California, where its current factory is located. Musk, 48, said last week that the company will decide whether to keep producing cars there based on how it’s treated going forward.

Following through on that threat would be challenging. The factory is the only place in the world where Tesla makes the Model S, X and Y. The company purchased it from Toyota Motor Corp. in the wake of the global financial crisis for just $42 million and has sunk billions of dollars into it since then.

During Tesla’s April 29 quarterly earnings call, Musk said the company was one-to-three months away from announcing where its next plant will be built.