An earlier report had informed that the Tesla Shanghai factory paused its production due to supply issues.
By : HT Auto Desk
| Updated on: 20 May 2022, 12:24 PM 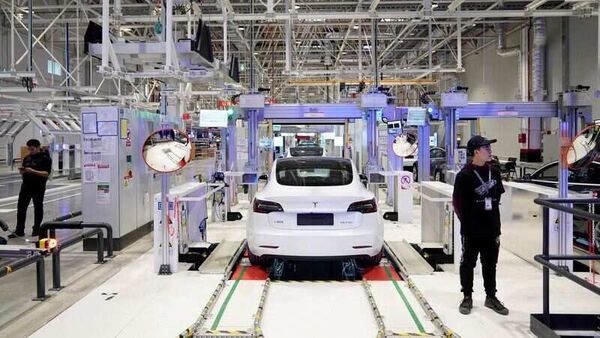 Tesla is planning to keep its employees at the Shanghai factory in the closed-loop system in which the staffers are moved to and from work and are tested for Covid-19 regularly, until mid-June. Tesla intends to follow this protocol even as Chinese authorities are easing some of the lockdown restrictions in the city. According to a Bloomberg report, Tesla Shanghai employees have been sleeping on the floor of the plant after their 12-hour shifts, six days a week. Tesla has started its production after a long pause following the lockdown.

Tesla wants to move workers into a dormitory and keep them in this sanitised loop till June 13, informed sources. Tesla is also aiming to start a second shift at its Shanghai factory by next week to resume production around the clock once the supply chain issues ease. Executives are now negotiating with Shanghai authorities over accommodation for the workers on the existing and planned shifts, added sources in the report. They could be housed in temporary dorms or vacant Covid isolation centres.

With two shifts running 24 hours a day at the Tesla Shanghai plant which is the EV company's only manufacturing factory in China, Tesla may be able to push production of its electric vehicles to around 2,100 cars a day as in normal times. The factory is currently running at about 45 per cent of capacity, a local government official said earlier this week.

An earlier report had informed that the Tesla Shanghai factory paused its production due to supply issues. The EV company's wire harness supplier Aptiv stopped shipping supplies to Tesla after infections were found among its employees.