Home Auto News Tesla Tequila Is Intoxicating. And Not For The Reasons You Think

Tesla Tequila is intoxicating. And not for the reasons you think

Tesla Tequila is priced at $250 per bottle but was sold out in no time despite the fact that there was no marketing for it.Tesla has zero experience making beverages of any kind and yet, the Tequila from the EV maker was lapped up by buyers.
By : HT Auto Desk
| Updated on: 09 Nov 2020, 09:09 AM 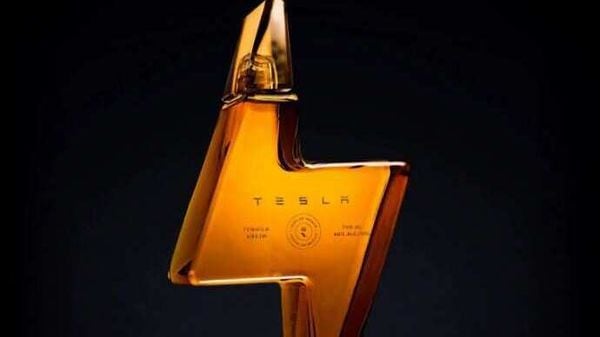 Tesla Tequila or Teslaquila is here for fans as the EV maker once again goes out of the box with how it does its business and connects with enthusiasts.

Tesla Tequila, or Teslaquila, has flown off the shelves shortly after being officially launched on the company website. For an organization that is known and renowned for its electric vehicles (EVs), the response to its alcoholic beverage serves as one more reminder of why advertising and marketing is not mandatory to make a product, any product, a success as long as the brand image is revered.

Tesla Tequila was put up for consumers on the company website recently with a rather pricey tag of $250 (around ₹18,500). It was reportedly sold out within a few hours as Tesla fans in high spirits - figuratively, not literally, appear to have grabbed the bottles with glee. Offered in a striking bottle shaped like a lightning bolt, Tesla Tequila showed that minimal or no advertising is no problem for the success of a product.

Tesla doesn't believe in conventional forms of advertising or marketing. Even still, its EVs are quite the rage in markets where it has a presence. Little wonder then that here is the world's most valuable car company that has left traditional giants like Toyota and Volkswagen behind.

Tesla Tequila itself was a joke shared by Musk on his Twitter feed a few years ago. At the time, he had tweeted a photo of him pretending to be passed out next to a Tesla EV and with a sign that said the EV-maker had gone bankrupt. The accompanying caption 'informed' Musk has been found surrounded by Teslaquila bottles.

Tesla decided to turn Teslaquila from a joke to Teslaquila in a bottle.

Many market watchers have highlighted that it is incredible that Tesla sold out the first batch of its Tequila with buyers not knowing the quality or the taste of the alcohol but still paying big bucks to bring a bottle home. A company that primarily makes EVs and with zero experience in making beverages of any kind is able to sell out a product such as Teslaquila is being especially highlighted as yet another example of how a strong brand image can almost guarantee success.

(Note: Consumption of alcohol may be injurious to health. This article does not seek to promote consumption of any alcoholic substance)