The raise through share sale could lead Tesla’s cash balance to approach $20 billion, Jas per a credit analyst.The latest capital raise follows an issue of $5 billion shares in September and a $2 billion offering in February.
By :
| Updated on: 08 Dec 2020, 06:04 PM 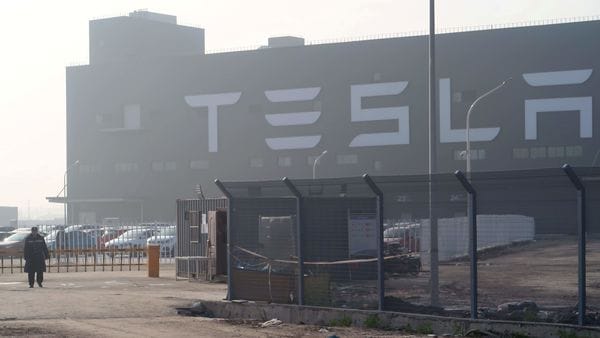 FILE PHOTO: A Tesla sign is seen on the Shanghai Gigafactory of the U.S. electric car maker before a delivery ceremony in Shanghai, China December 30, 2019. REUTERS/Yilei Sun/File Photo

Tesla Inc. is taking advantage of its surging shares by going back to the capital markets for the third time in ten months and raising as much as $5 billion of common stock.

The sale through an “at-the-market" offering program, according to a regulatory filing, meaning the stock will be sold over time at prevailing market prices. After soaring almost 670% this year, Tesla shares dipped as much as 4.2% before the start of regular trading Tuesday.

The raise could lead Tesla’s cash balance to approach $20 billion, Joel Levington, a Bloomberg Intelligence credit analyst, said in a report. The company’s credit quality is now “well in excess" of its ratings even after three upgrades during the global pandemic, he wrote.

Chief Executive Officer Elon Musk is again seizing on a rally that started as the maker of the Model 3 began to post quarterly profits in the second half of last year. The opening of a plant near Shanghai, addition of the Model Y crossover to the lineup, advances in battery technology and anticipation of inclusion into the S&P 500 Index has led investors to assign Tesla a much richer valuation than any other auto manufacturer in the world.

It’s apparently led Musk, 49, to worry about employees taking their eye off the ball. He urged staff on Dec. 1 to be mindful about spending and play a “Game of Pennies" even after Tesla reported its fifth consecutive quarter of profit in October. The automaker had $14.5 billion in cash and cash equivalents at the end of September.

(Also read | Elon Musk Foundation moves to Texas but is Tesla shifting out of California too?)

The latest capital raise follows an issue of $5 billion shares in September and a $2 billion offering in February. That has helped Tesla more than double planned spending on plants and equipment this year. The new money will support plans announced in October to double the carmaker’s capital-expenditures budget during the next two years to a range of $4.5 billion to $6 billion.

Tesla is currently building two new factories -- one in Austin, Texas, and its first European plant, near Berlin -- and expanding output at its existing vehicle-assembly facilities in Fremont, California, and Shanghai.