Tesla starts selling locally made Model Y in China this month.Starting price about 10% less than similar gasoline-powered cars.
By :
| Updated on: 12 Jan 2021, 09:08 AM 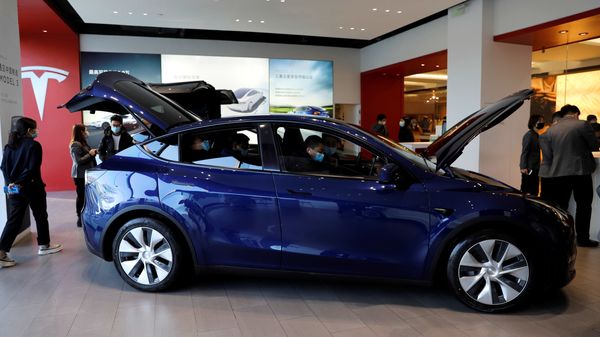 New models will help electric vehicle sales in China zoom this year, after tepid business in a virus-riddled 2020, and analysts predict Tesla's Model Y pricing will emerge as a major disruptor in the world's biggest car market.

It set the starting price at 339,900 yuan ($52,376), or 10% below official prices of Daimler's Mercedes GLC, BMW's X3 and Audi's Q5L - all locally made gasoline sport utility vehicles (SUVs) with similar size and positioning.

"The pricing will disrupt the conventional premium cars market and shatter the traditional belief that the cost of an electric vehicle (EV) should be higher," said Cui Dongshu, secretary general at China Passenger Car Association (CPCA).

The Tesla Model Y pricing - that analysts say will be the price to beat - and new models from others such as Mercedes and BMW will help drive up demand in China, which also accounts for almost half of global EV sales.

Sales in China of so-called new energy vehicles (NEVs), which include battery electric, plug-in hybrid and hydrogen fuel-cell cars, are expected to grow 30-40% to around 1.8 million units in 2021, according to its top auto industry body China Association of Automobile Manufacturers and analysts.

NEV sales likely rose only 8% last year to 1.3 million, lagging a government target for annual sales to reach 2 million by 2020, as the Covid-19 pandemic forced people indoors and eroded demand in the first few months of the year.

China's decision to extend EV subsidies by two years, instead of phasing them out by end 2020, will also underpin demand in 2021. Beijing wants NEVs to account for 20% of its overall auto sales by 2025, versus about 5% now.

Stricter rules in some cities to promote greener vehicles and reduce air pollution are expected to force urban customers to buy EVs too, according to Yale Zhang, head of the Shanghai-based consultancy Automotive Foresight.

Betting on growing demand, NEV makers such as homegrown Nio Inc and Xpeng Inc as well as foreign players, such as Tesla, are expanding manufacturing capacity.

Tesla is expected to make "around or over half a million" vehicles in China this year, with around 20% earmarked for international exports, industry sources with knowledge of Tesla's orders to suppliers said.

That represents a big increase from 2020, when Tesla produced around 150,000 cars, analysts said.

It is offering the same financing tools to customers for the Model Y as it does for the Model 3 sedan that allow buyers to pay only 10% of the cost upfront when they get the car.

Tesla's Model 3, which it has been making in China for over a year, is also seen chipping away at the dominance of Daimler, Audi and BMW in the conventional premium auto sector.