TeslaMic, a microphone launched by Tesla for its in-car karaoke system is currently only available in China.
By : HT Auto Desk
| Updated on: 30 Jan 2022, 04:28 PM 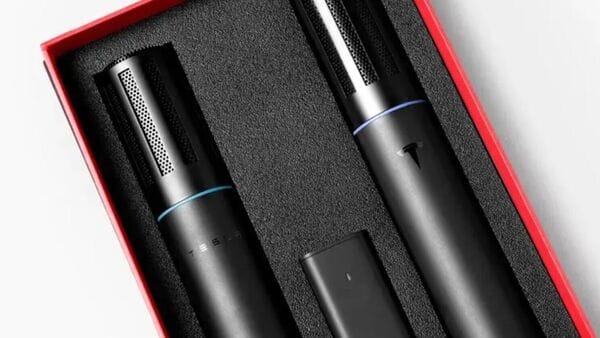 The Tesla microphone comes in a set of two and features the Tesla logo on it.

EV giant Tesla, as part of its ‘Chinese New Year’ software update in the country has launched a microphone called ‘TeslaMic’ designed for its in-car karaoke system, Electrek reported. The product is currently only available in China. Apart from the product, Tesla has also started rolling out a software update package for the occasion.

The microphone will work with with Leishi KTV, a karaoke system that is being included as part of the software update. The microphone has also been launched on the company's Chinese merch store for 1,199 Chinese Yuan. The microphone comes in a set of two and features the Tesla logo on it.

Back in 2019, Tesla had released the in-car ‘Caraoke’ feature for its vehicles as part of of its V10 software update. The system is designed to play a limited list of songs with lyrics appearing on the center display. For the latest 2022 software update in China, the company is pushing out a more complete karaoke system using Leishi KTV’s interface and catalog, and running on the in-car computer.

As per the company's description about the TeslaMic, it pairs automatically with the system and comes equipped with a few sound modes to help out the singers. The device can also be used outside Tesla vehicles, which the automaker demonstrated as part of its 2022.2.1 software update released on its official Weibo account.

Though TeslaMic is currently only available in China, the automaker expanded its US trademark to audio products, the report stated. It could mean that Tesla is working on launching the TeslaMic in other markets. Karaoke is a very popular hobby in many Asian countries and has especially gained quite a popularity in China over the last decade.