Home Auto News Tesla Cyberquad, Children's Version Of Cybertruck Pick Up, Sold Out In One Day

Tesla Cyberquad, children's version of Cybertruck pick-up, sold out in one day

Tesla Cyberquad for kids takes design cues from the upcoming Cybertruck, features a full steel frame, gets cushioned seat and adjustable suspension with rear disk braking.The Tesla ATV is suitable for kids who are eight-year old or above.
By : HT Auto Desk
| Updated on: 05 Dec 2021, 05:59 PM 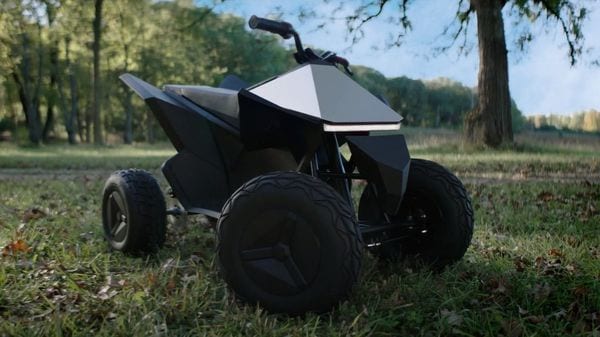 Tesla has launched Cyberquad, a four-wheel electric car inspired by Cybertruck, for children at a price of $ 1,900.

Tesla recently introduced a kid's version of electric car inspired by Cybertruck, called Cyberquad, and it is now already sold out. The company's online shop shows the item listed as ‘out of stock’ and no more units can be bought until Tesla replenishes the stock.

The four-wheel all-terrain vehicle powered by electric motor got sold out in just one day, Insideevs reported. Despite the price tag of ₹1,42,958, the electric mini-ATV is no longer available for customers. However, those who have confirmed their orders with Tesla are putting up ads on eBay to make some quick bucks by selling the ATV at a higher price. The bids go as high as $3,500, and $4,000, the report stated.

The Cyberquad has been developed in partnership with Radio Flyer, the company that also manufactures the battery-powered Model S ride-on and My First Model Y ride-on for kids, the report stated.

Tesla Cyberquad for kids takes design cues from the upcoming Cybertruck, features a full steel frame, gets cushioned seat and adjustable suspension with rear disk braking. The ATV features LED light bars, and is powered by a lithium-ion battery with up to 15 miles of range.

The ATV, which is suitable for kids who are eight-year old or above, gets a configurable top speed of 10 mph. The speed can vary between 8 kmph and 16 kmph, and there's also a reverse mode with the top speed being 8 kmph. Though a toy car, the ATV sources power from a 36V lithium-ion battery which is used in electric cars too. It takes about five hours to get completely juiced up using a regular wall outlet.

Speaking of the elder sibling, the Cybertruck, Tesla has delayed its launch to 2022 while the vehicle was first showcased in November of 2019. Tesla claims Cybertruck has a range of nearly 950 kms on single charge, acceleration to 100 kmph in 3 seconds and capability to tow up to 6,300 kilos.