Home Auto News Tesla Created Demand For Electric Vehicles, But Only For Tesla

Tesla created demand for electric vehicles, but only for Tesla

With the notable exception of the Model 3, consumers have not been charged up by the highly touted electric offerings already on the market.
By : Bloomberg
| Updated on: 22 Jan 2020, 10:09 AM 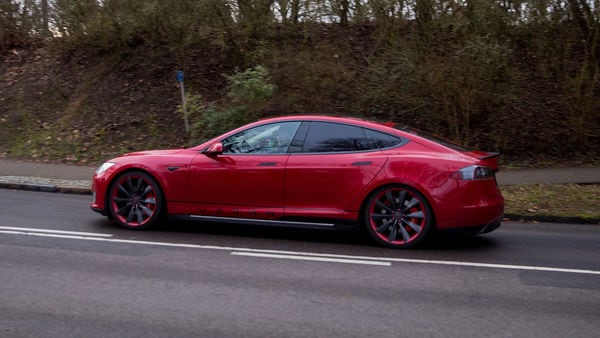 The word 'vegan' sits on the door trim of a personalized Tesla Inc. Model 3 electric automobile driving on a road in Gruenheide, Germany, on Monday, Jan. 13, 2020. Elon Musk is taking his fight for the future of transport into the heartland of the combustion engine, where the established players long laughed off Tesla as an upstart on feeble financial footing that couldn�t compete with their rich engineering heritage. Photographer: Krisztian Bocsi/Bloomberg

But so far, Tesla is the only car company looking likely to benefit in the coming years. Look at every other corner of the U.S. auto industry -- the world’s most valuable automaker, dealers, consumer surveys and market forecasts -- and a more ominous picture emerges.

A top American executive for Toyota Motor Corp., whose market value is still more than double Tesla’s even after Elon Musk’s epic run, recently warned of electric-car catastrophe. Auto retailers caution growth will be slow, citing still-high battery costs and range constraints. And far more U.S. shoppers are willing to kick the tires on a hybrid than cars that only plug in.

The cause for concern remains as EVs start to appear in showrooms in greater numbers. The models on the market will swell almost sevenfold to 121 models in the next half decade, from 18 now, according to LMC Automotive. But the researcher sees all those vehicles claiming just 5.5% of U.S. sales in 2025.

There is irony, of course, in Carter predicting an EV reckoning just as Tesla was wrapping up a record year. The dim view he holds is not unique among legacy automakers, which have spent more than a century building and selling cars that burn fossil fuel. But that cautious mindset is rooted in pragmatism -- profits remain elusive in the high-cost, high-price EV business.

That’s why Toyota and other automakers have been reluctant to dive head-first into EVs until they’re closer to reaching price parity with internal combustion engine vehicles, which BloombergNEF predicts will happen around 2024.

EV sales are expected to grow to be roughly the size of the shrinking mid-size car segment by mid-decade, to about 934,000 units, LMC says. But whereas the meager family sedan market will be split between just 13 models, the researcher expects there to be more than nine times as many EVs fighting for air.

Thanks to its hot-selling Model 3 sedan, Tesla accounted for nearly eight-in-10 EV sales in America last year. By 2025, LMC sees Tesla offering seven models that will account for a quarter of segment sales. That would leave the 114 competing offerings from other automakers averaging annual sales of 6,145 per model, or about 118 units a week.

“It’s tough to make a business out of that volume per EV," said Jeff Schuster, senior vice president of forecasting at LMC. “Electric vehicles are the future. What’s in question is when that future will arrive and when it pays off? It’s a long road and there definitely could be some carnage along the way."

Automakers, fearing they’ll be left behind if they don’t accelerate their shift from the internal combustion engine, are going to great lengths to build buzz for new electric models.

Ford staged a star-studded unveiling of its Mustang Mach-E in an airplane hangar a short stroll from SpaceX, Musk’s rocket company. Porsche debuted its Taycan using Niagara Falls, a Chinese wind farm and a German solar site as backdrops.

But with the notable exception of the Model 3, consumers have not been charged up by the highly touted electric offerings already on the market.

Sales of the Chevrolet Bolt sagged almost 9% last year and the Nissan Leaf slumped 16%, with neither cresting 17,000 units. Last month, Mercedes-Benz put off the U.S. debut of its first EV by a year after Jaguar and Audi struggled to sell their first electric offerings.

So far, only Tesla and its billionaire chief executive officer have come up with an alluring amalgam of status and sex appeal.

“Tesla has created the market by having a mystique," said Art St. Cyr, the head of American auto operations for Honda Motor Co., pointing to Musk’s Model 3. “If Honda, Toyota, GM or Ford made that vehicle, we probably wouldn’t sell them in those numbers."

Honda, Ford and Toyota, which all have a history of selling hybrids, see them prevailing for the time being because mainstream buyers continue to suffer “range anxiety" -- the fear of being stranded by running out of juice in an EV.

“People are not generally willing to pay more to be inconvenienced," St. Cyr said.

But a study released by Deloitte this month found 27% of U.S. consumers are actively considering a hybrid, while just 8% are looking at pure electrics. Some 59% of Americans still want gasoline-powered cars, the highest of any country Deloitte surveyed globally.

Government mandates have made China the world’s top market for EVs, and European regulators also are stimulating demand with incentives to help reach more stringent goals for reduced emissions.

But in the U.S., where President Donald Trump has sought to ease car-pollution rules and fuel is cheap, consumers are in no hurry to ditch the gas pump. The Deloitte study found consumers in the U.S. are most concerned about a lack of charging stations.

“The automotive ecosystem still has some work to do in terms of making EVs as easy and convenient as internal-combustion engines," said Craig Giffi, Deloitte’s vice chairman.

The onslaught of new EVs coming could actually help solve the problem. Until now, most EVs other than Tesla’s have been boring “compliance cars" aimed at meeting tougher regulations, said Greg Brannon, director of automotive engineering at AAA, which just conducted a survey that found 96% of EV owners would buy another because the experience was better than expected.

“Most people are looking for a crossover utility vehicle these days," Brannon said. “Now, we’re seeing some of those coming, and that’s what it’s going to take. It has to be something people want to drive and can get excited about."

The pickup segment, home to the three best-selling models in the U.S., is about to get jolt, too. Musk caused a sensation with the unveiling of the Cybertruck in November. Ford has an electric truck under development recently filmed towing 1 million pounds of loaded rail cars. And Amazon.com Inc.-backed Rivian Automotive Inc. plans to roll out its R1T starting late this year.

But for all the hype about the chips automakers are pushing forward on the table, it’s unclear when or if their gamble will pay off.

“Somebody’s got to buy these things," said Toyota’s Carter. “There is a market. The question is: How big and when will it mature?"