Home Auto News Tesla Could Roll Out Half A Million Evs From China In 2021: Report

Tesla could roll out half a million EVs from China in 2021: Report

Tesla opened its Shanghai facility late 2019 but has managed to make it a key hub for its China and global plans.Tesla facility in Shanghai primarily manufactures Model 3 EV but is now also rolling out Model Y SUV.
By : HT Auto Desk
| Updated on: 11 Nov 2020, 11:41 AM 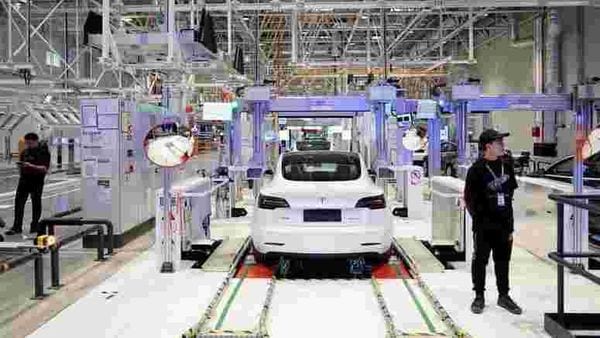 File photo - Tesla China-made Model 3 vehicles are seen during a delivery event at its factory in Shanghai, China.

Tesla has been rapidly expanding its capabilities to manufacture and ship out its electric vehicles (EVs) from its plants and its Shanghai facility in China has risen to be one of the most important centers for the company in just a year since it was first officially opened. A report now suggests that Tesla could achieve the roll out of half a million cars from here in 2021, something that could further charge the EV-maker's surge in a fast-evolving world of electric mobility.

According to Electrek, a report in the Chinese media quoting unnamed sources has revealed that Tesla plant in Shanghai is gearing up to massively ramp up its capability with the target of rolling out 550,000 units of EVs in 2021. The same report also mentions that of this total number, there would be around 300,000 Model 3 EVs and the rest being made up by Model Y SUVs.

This, if true, may be a substantial increase because Tesla has a capacity of 250,000 from the Shanghai plant at the end of the last quarter. The plant has been making Model 3 cars but is now expanding to include production of Model Y as well.

Tesla has given a whole lot of priority to the Shanghai facility in the recent past with units from here now being shipped to several international markets as well. Experts mostly see the move to ramp up production at this facility as a way for Tesla to ease pressure on its facility back home in California which could now cater to local US demand and be home to a wider portfolio of products being made.

Tesla also has a facility coming up near Berlin in Germany while CEO Elon Musk has already confirmed that the company's Cybertruck will be manufactured at a new plant in Texas.

That China is the world's largest EV market, and by quite a distance, also helps the Shanghai plant emerge as a significant center for Tesla's present and upcoming plans. As such, ramping up production capacity here makes sense as it would be able to cater to a massive local demand while also helping the company make it a hub for exports to markets in Europe and Australi