China is an important market for Tesla, with sales topping 120,000 units last year, according to local registration data.China is also the world’s biggest EV market and sales of new energy vehicles are expected to jump 40% this year to 1.8 million units.
By : Bloomberg
| Updated on: 02 Feb 2021, 12:07 PM 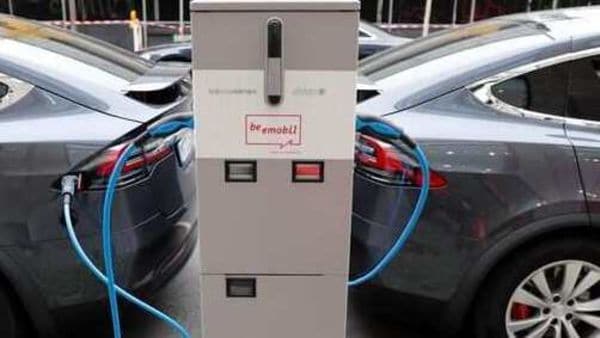 Tesla Inc. apologized to State Grid Corp. of China after a viral video showed one of the carmaker’s employees purportedly telling a customer that an overload in the national grid damaged their electric vehicle.

The owner of the Model 3 car in southeast China’s Jiangxi province told local press that his new EV wouldn’t start after charging the battery at a supercharger station, according to Caixin. In the video, the Tesla staffer appears to blame the state utility’s charging infrastructure.

The power company’s Nanchang branch denied the allegations, saying that “our power grid has been operating at a stable voltage, and no abnormality has been detected."

Tesla said the video had been edited and the overload explanation was only one possibility discussed that might have caused the vehicle’s inverter to burn out, according to Caixin.

“We are deeply sorry for the misunderstanding and would like to apologize to the Nanchang Power Grid for the inconvenience caused," Tesla said in a video of its own. “We have already resolved the problem with the customer and are carrying out tests and investigations on the cause of this failure."

China is an important market for Tesla, with sales topping 120,000 units last year, according to local registration data. The California-based group globally delivered almost 500,000 cars in 2020 and expects more than 50% growth in 2021, implying it will hand over at least 750,000 vehicles.

China is also the world’s biggest EV market and sales of new energy vehicles are expected to jump 40% this year to 1.8 million units, the China Association of Automobile Manufacturers forecasts.

In an electric car, the inverter changes the battery’s DC electricity to AC in order to power the vehicle’s motor. An official with the China Alliance for the Promotion of Electric Vehicle Charging Infrastructure told Caixin that the likelihood of a charging station damaging an inverter was very small.