Stuck in traffic? Spare a thought for Europe’s 'Capital of Chaos' 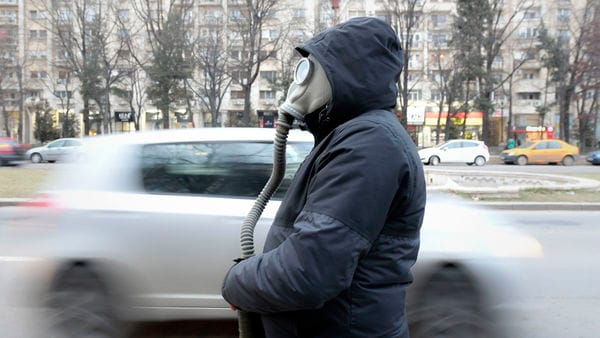 Cars drive by a man wearing a vintage gas mask during a climate and anti-pollution protest in Bucharest, Romania.

It was 8:30 a.m. and Valentin Mihai showed a brave face as he inched his Volkswagen Golf past former Romanian dictator Nicolae Ceausescu’s sprawling palace, the largest building on the planet after the Pentagon.

Bucharest was blanketed in a surprise inch or two of snow, but that didn’t make any difference. “At this hour, with or without the snow, it’s just slow," said Mihai, an Uber driver. “I don’t have the words to describe it."

Three decades after his demise, the legacy of Ceausescu’s megalomania is to make Bucharest the most congested capital in the European Union for the past three years. The city lags at least a decade behind major European peers in tackling the most pressing issues—traffic and pollution—and they’ve become a a key part of the campaign before local elections.

Nowhere on the continent had such a brutal, chaotic dictator lording over city planning. That was then swiftly followed by a deep love affair with the automobile. Add in a building boom and influx of people to the nation’s economic dynamo, and you have a city that barely moves for hours of the day.

The weight of cars clogging Bucharest streets each day is robbing every driver of nine days and 11 hours of life per year, equivalent to the time it takes for Romania’s main auto exporter to make 15,600 cars. That’s driving up costs for businesses including delivery, courier and taxi services while the bumper-to-bumper lifestyle is damaging health and threatens to deter investment.

The number of respiratory diseases like asthma alone has tripled in Bucharest during the past five years, especially because of traffic pollution, according to Beatrice Mahler, the manager of the city’s Institute for Pneumology.

Tech giant Ericsson AB would have a hard time choosing Bucharest again for new offices because of the congestion, according to Dragos Rebegea, the Swedish company’s chief in Romania. “We have colleagues who spend two to three hours a day in traffic," he told local media. “People should come to work with a positive energy, not after being stuck in traffic."

The Bucharest municipality plans to spend 518 million euros ($563 million) this year on projects to improve traffic and combat pollution, including maintaining the existing road network and subsidies for public transportation. After buying 400 diesel buses two years ago, it now plans to buy 130 hybrid buses.

There’s also a planned levy, dubbed the “Oxygen Tax," on higher polluting vehicles. That was due to come into force on Jan. 1 and has been postponed as local politicians consider the impact. It would apply to about 13% of the car owners, who would have to pay as much as $420 a year while one in four cars would be banned entirely from downtown.

Mayor Gabriela Firea, who is vying for re-election this year, has defended the tax, though has floated the option of another postponement following negative reactions. Her critics, such as Ciprian Ciucu, a member of the Bucharest’s local council and a potential challenger for her job, said behavior first needs to change.

“Without urgent solutions, we risk serious health problems," Ciucu said. “In the longer term, people will up and leave, investors won’t come in anymore and Bucharest will end up as a ghost city." 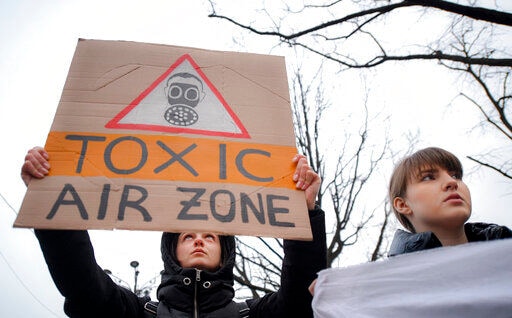 A girl holds a banner during a climate and anti-pollution protest in Bucharest, Romania. (AP)

From Budapest to Sofia, the most visible influence of communism on getting from A to B are the trams that have always cut through city streets. The most enduring image of Bucharest is a sea of cars, with buses caught up in the bottleneck. The subway’s existing lines only represent 4% of the city’s transportation network and expansion works have been dragging on for 20 years.

Ceausescu was like no other leader in the eastern bloc. His regime was the most repressive and Romania’s economy was crippled by debt. He embarked on huge costly glamor products like the People’s Palace that dominates Bucharest, with public transportation an afterthought.

The country exported whatever it could to pay debt, leading to brutal shortages and even starvation. People had to wait between five and seven years before getting the trademark Dacia car. Gasoline was rationed.

Then came the revolution in 1989 and his execution. Since then, Bucharest’s population has doubled and the number of cars tripled, a status symbol in a country that was deprived of them. PricewaterhouseCoopers reckons the number of cars reached 1.4 million in 2018, about the size of the city’s population. There’s one parking spot for every five cars, according to Uber.

“The car is part of Romanians’ personal brand, it’s a social label," said Mihaela Rus, president of the PsihoTrafiQ Association of Psychology and Road Safety.

In the meantime, those who make a living on the Bucharest roads aren’t waiting for congestion to get better anytime soon. The country’s largest on-line retailer, eMag, is among the companies that have resorted to creating their own electronic mapping system that alerts delivery drivers to heavy traffic.

Uber is working on similar technology, gathering its own data points to tackle the challenge of staying on time, said the platform’s local manager, Nicoleta Schroeder.

“There is a crazy amount of cars in Bucharest," said Schroeder, who said her family has now reduced the number of cars they own from one per person to just one vehicle. “Like everyone, I plan my life around traffic."