More than 150 positive cases have been reported in Beijing and it is believed that the infection may have spread to four other provinces here.Traffic movement has come down in China's capital city and there is speculation that economic activity could once again come to a screeching pause.
By : Shubhodeep Chakravarty
| Updated on: 18 Jun 2020, 12:58 PM 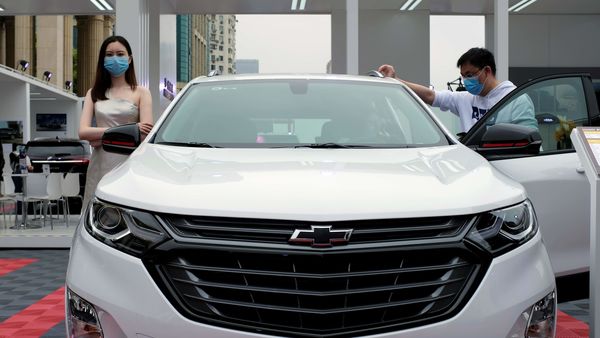 File photo: A model wearing a face mask following the coronavirus disease (Covid-19) outbreak stands next to a Chevrolet vehicle at a sales event in China.

China, the world's largest car market, saw a spurt in sales of vehicles in May after struggling and sputtering due to restrictions imposed due to the Covid-19 pandemic. From small cars to luxury vehicles, the auto industry showed signs of life that came as good news for international as well as local players who had resumed work in a phased manner. The ray of hope, however, has once again been eclipsed by the clouds of gloom with positive cases being reported in the country's capital of Beijing.

Bloomberg reported that the number of new infections from the outbreak that started at a wholesale fruit and vegetable market in Beijing has now surpassed 150. The somber mood on the streets is palpable from the fact that road traffic has once again seen a sharp decline in the city. Schools have been shut, flights have been cancelled and the spate of restrictions which were in force in months gone by have either returned or are being contemplated upon even if a lockdown is not in force currently. "A city-wide lockdown in Beijing would not only reverse the process of economic and social reopening, a key policy objective of the party, but also undermine considerably the government’s own narrative on the success of its anti Covid-19 campaign," Bloomberg quoted Yanzhong Huang, professor at the Center for Global Health Studies of Seton Hall University, as saying. "The social, economic, and political pain might be way too high to justify a city-wide lockdown."

The infection has already - and reportedly - spread to four other provinces. This has led many to speculate that the repair work to the Chinese economy is likely to suffer.

Apart from the aviation and tourism industry, the automobile industry in China had been severely hit by the first wave of Covid-19. The country claimed that it had managed to contain the virus and sales charts of companies began reflecting it. Luxury cars imported from the US were snapped up once again. The decision to extend subsidy for new-energy vehicles also led to a rise in demand for electric cars. Companies like Tesla, Volkswagen and even Ford had only just begun looking at the Chinese market with some degree of hope. Tesla's sales, in fact, had tripled in May as compared to the month of April.

What happens now is the big question doing the rounds.

Quite obviously, Beijing is one of the largest markets within China for vehicles and any restriction here to contain Covid-19 infections will have an impact on sales. And if the infections spread to other cities, it would have a cascading effect yet again and possibly on the same lines as in the first few months of 2020. For instance, auto sales had dropped by 18.7% in January in comparison to the same month in 2019. The drop turned into a plunge in February with sales down by over 85%, as per China Association of Automobile Manufacturers (CAAM). March saw a decline of 48.4%.

Fall and rise in sales is only one aspect with the other being production. If the infection spreads to cities which are home to major factories, supply could take a hit like it had previously. The Hubei province where the coronavirus is believed to have originated from has a number of auto factories and had begun buzzing with activity once new cases evaporated.

Much would depend on how the infections are contained where they have been reported and the strategy authorities adopt hereon.