Lucid currently manufactures its vehicles at a plant in Arizona, and also plans to build its first overseas production factory in Saudi Arabia later this year.
By : HT Auto Desk
| Updated on: 27 Apr 2022, 10:04 AM 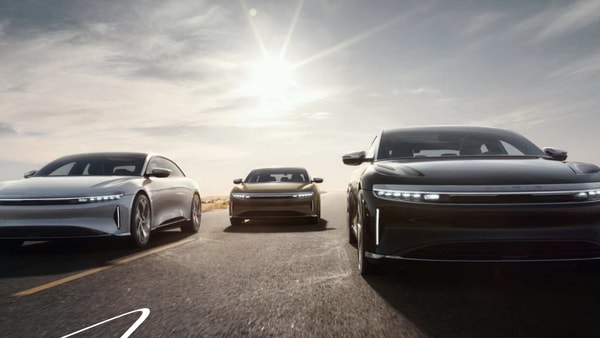 The government of Saudi Arabia has signed an agreement with electric carmaker Lucid Group for the purchase of up to 100,000 of the carmaker's vehicles over the next 10 years. The country has committed to purchase 50,000 vehicles under the agreement, with an option to buy an additional 50,000 vehicles during the ten-year time frame, Lucid said in a statement. Following the news, the carmaker's shares rose 5.4% in extended trading.

The deal marks the latest tie-up between the California-based EV company and Saudi Arabia, whose Public Investment Fund is Lucid's largest shareholder, with about a 61% stake in the company. The Saudi government would pay Lucid either in the US or Saudi retail price, whichever is lower, in addition to import and other delivery costs.

Lucid currently manufactures its vehicles at a plant in Arizona, and also plans to build its first overseas production factory in Saudi Arabia later this year. In its upcoming factory, the carmaker expects to eventually manufacture up to 150,000 vehicles per year. The vehicles to be bought by the Saudi government are expected to come from both factories of the carmaker.

It is expected that Lucid will start delivering the vehicles to the Saudi government from 2023 onwards, with order numbers initially ranging from 1,000 to 2,000 annually, and increasing to between 4,000 and 7,000 starting in 2025. However, the company has not offered discounts for any vehicles under the agreement, a Lucid spokesperson told Reuters.

Lucid Group, that looks to compete with Tesla, had cut its 2022 production forecast in February from 20,000 vehicles to 12,000 to 14,000 vehicles this year due to supply chain challenges. The company began deliveries of its $169,000 Lucid Air premium sedan in the US in October last year, and said it expects to deliver to Canadian customers beginning this spring.