As per Royal Enfield, the Tornadoes Wall is a mark of respect for the unrelenting valor and bravery of the soldiers of the Indian Army.
By : HT Auto Desk
| Updated on: 10 May 2022, 17:19 PM

Royal Enfield, the world's oldest motorcycle brand has been associated with the Indian Armed Forces since 1952.

Royal Enfield has announced a special commemorative sculpture called the "Tornadoes Wall" to commemorate its long-standing association with the Indian Army. The sculpture was recently inaugurated by Lt Gen MKS Yadav, SM, DGST and Jayapradeep V, Head-Business Markets, India+, Royal Enfield. The ceremony was also attended by Tejender Singh Baoni, the sculptor of the monument. It also rolled out the Tornadoes Coffee Table Book. This book illustrates the rich history and achievements of the team since its inception. 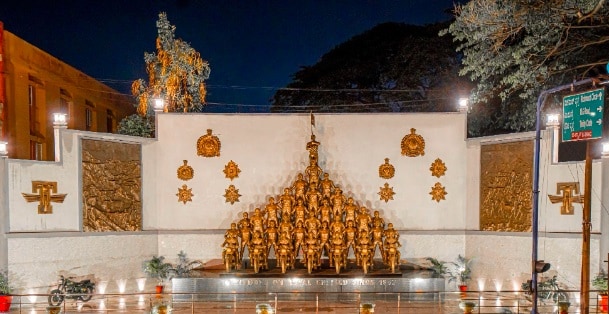 The Tornadoes Wall is a mark of respect for the unrelenting valor and bravery of the soldiers of the Indian Army, says Royal Enfield.

Royal Enfield, the world's oldest motorcycle brand has been associated with the Indian Armed Forces since 1952. The company started providing bikes to the Indian Army in 1952 and still continues to be the largest supplier of motorcycles to the armed forces. It adds playing an important role in Tornadoes history, as the first-ever stunt performed by the team dates back to 1967, on a Royal Enfield Bullet 350.

On the occasion, the company has also announced the launch of the Tornadoes collection - a limited-edition apparel range inspired by the Indian Armed Forces. The Tornadoes Collection includes a special range of protective apparel exclusively designed and available for the Army Service Corps (ASC) team, for them to perform their stunts safely, and a range of graphic t-shirts, full sleeve t-shirts, sweatshirts, shirts, jackets, trousers, caps, headgear and mugs, designed for motorcycling enthusiasts and ones who aspire to associate with Tornadoes and the Royal Enfield brand. This range starts from ₹350 and extends all the way up to ₹5900, and is available all across the leading Royal Enfield stores, Shoppers Stop, Central, and Globus stores across India and online at the company's official website.