The three-row Porsche model could also reportedly be related to the electric vehicle that is currently under joint development from Porsche, Audi, and Bentley.It makes sense for Porsche to invest in an SUV given the US' love for vehicles that are big and tall.
By : HT Auto Desk
| Updated on: 24 Nov 2021, 11:01 AM 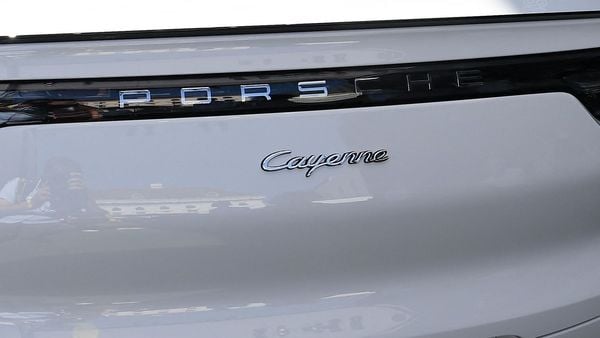 A Porsche Cayenne e-hybrid car is being charged at the International Motor Show (IAA) Germany, (File photo used for representational purpose only)

Porsche could be working on a new three-row SUV model that will be larger, wider, and longer than the Cayenne, and will sit above it in the lineup, Automotive News reported, citing dealer sources. The new model, shown to the dealers, is expected to arrive in the market in the second half of the decade as a plug-in hybrid version, while a battery-electric variant will follow.

A dealer called the new SUV rakish, saying, “It’s a new style of vehicle that is part sedan, part crossover." Another dealer called it “very un-Porsche-like," and revealed that the model has a flat rear design. “It’s not anything like the Macan and Cayenne," the dealer told Automotive News.

Interestingly, the new model under development could be related to the flagship electric vehicle that is currently under joint development from Porsche, Audi, and Bentley. The joint project vehicle has been codenamed ‘Landjet’ and is a three-row, seven-seater model that it being developed as part of Audi’s Project Artemis. It is expected to have a range of 404 miles.

Though the new three-row Porsche model may sound unreal or unusual, Porsche has already proved that it can sell SUVs - first when it introduced the Cayenne model in 2002 and second with the launch of the Macan in 2013. Another noteworthy point is that the Porsche SUVs are more popular with younger buyers as compared to its other sports cars. The average age of a Porsche car owner is 60 whereas that of a crossover owner is 38.

It also makes sense for the automaker to invest in an SUV given the US' love for vehicles that are big and tall. It also makes sense financially to add a three-row SUV to its lineup. Porsche has also earlier made clear that it is not completely opposed to the idea of expanding the definition of ‘what makes a Porsche’.