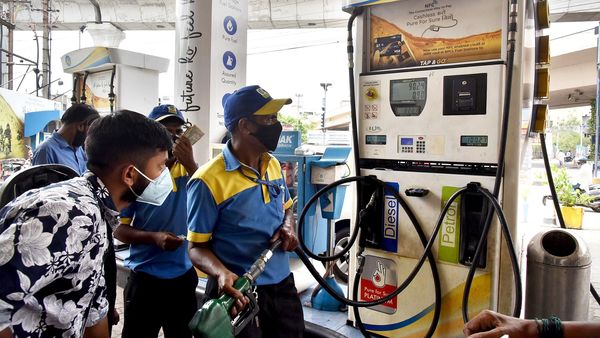 Petrol and diesel price today received yet another hike, as upwards price revision for both fuel continue in July as well after 16 hikes last month. The latest fuel price hike has taken petrol past ₹105-per-litre mark in Mumbai, as Chennai became the latest major city to see the fuel price cross triple figures.

On Friday, petrol got costlier by 35 paise in Delhi, though there was some respite in diesel prices, which remained unchanged. Petrol pirce in Mumbai today will cost ₹105.24 while one litre of diesel will cost ₹96.72. Mumbai saw the price of petrol breach the Rs-100-per-litre mark for the first time on May 29.

Kolkata too is now verge of joining the Rs-100 club. The price for a litre of petrol has already reached ₹99.04 per litre in the city. The diesel price is still at ₹92.03 per litre in the capital city of West Benga.

In May this year, Bhopal became the first state capital in India where petrol price crossed the ₹100-mark. Later, state capitals like Jaipur, Mumbai, Hyderabad, Bengaluru, Patna and Thiruvananthapuram also joined the list of places where petrol breached the mark.

Petrol currently costs more than ₹100 per litre in as many as 12 states and Union Territories. These include states like Rajasthan, Madhya Pradesh, Maharashtra, Andhra Pradesh, Telangana, Karnataka, Jammu and Kashmir, Odisha, Ladakh, Bihar, Kerala and Tamil Nadu. Diesel price too has breached the ₹100-per-litre mark in Rajasthan and Odisha.

In June, India saw as many as 16 fuel price hikes. June alone saw petrol and diesel price rise by more than ₹4 per litre. The spate of price rise began on May 4 after the oil companies began revising fuel prices upwards after a hiatus of more than two months due to assembly elections in five states.