The Centre mandated declaration of all lanes at toll plazas along national highways as FASTag lanes by December 15, 2019, to encourage digital payments and to reduce bottlenecks.
By : Anisha Dutta
| Updated on: 02 Jan 2020, 04:41 PM 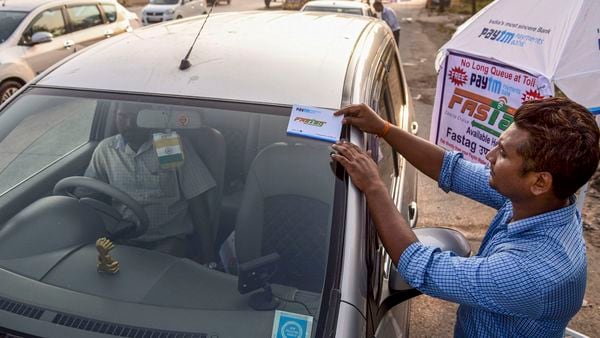 Over 11.5 million FASTags have been issued till date as their sale has picked up pace since the Centre made digital payments mandatory at national highways toll plazas, according to Union transport ministry data. Up to one lakh tags have been issued daily and over three million transactions have happened through them. The average daily transaction through Electronic Toll Collection is over ₹53 crore, as per the data.

The Centre mandated declaration of all lanes at toll plazas along national highways as FASTag lanes by December 15, 2019, to encourage digital payments and to reduce bottlenecks. A lane each has been designated as a hybrid at toll booths to also allow cash payments during the rollout phase.

FASTag is a radio frequency identification sticker typically fixed to a vehicle’s windscreen. It allows the deduction of toll wirelessly and automatically without requiring a vehicle to stop. The tags were made mandatory for all new cars sold after December 1, 2017, to encourage digital payments and to address congestion at toll booths.

The Centre relaxed rules for the rollout of the mandatory FASTag mechanism and allowed more collection centres to accept cash payments instead of the previous directive that limited it to 1 amid fears of traffic chaos once the new rule came into force from December 15. The Centre had also said a shortage of tags was being caused due to a supply deficit.

Nearly half of the vehicles crossing national highway plazas on December 15 paid toll through FASTags even as data suggested an increase in their average waiting time.

As per the ministry’s FASTag data pertaining to December 15, which HT reported on December 17th, as many as 1.95 million transactions were done on that day. A total of ₹39.5 crore was collected through FASTags at toll booths out of ₹78.87 crore toll collection even as the average wait time for vehicles increased, according to the data.

As per the data from the Central Toll Plaza Traffic Monitoring System, which is currently mapping traffic conditions live at least 488 places, the average waiting time of vehicles at the plazas increased from 10 minutes and four seconds the date (on December 15?) the previous year to 12 minutes. The average waiting time of vehicles on December 14 stood at 10 minutes and 57 seconds. On average, nearly 6 million vehicles cross toll booths daily.

According to the monitoring system, there is an approximate yearly loss of over ₹12,000 crore due to fuel wastage at toll plazas.

To expedite the sale of tags before December 15, Union road transport and highways minister Nitin Gadkari announced that all FASTags sold by the National Highways Authority of India will be given free of cost till December 15.