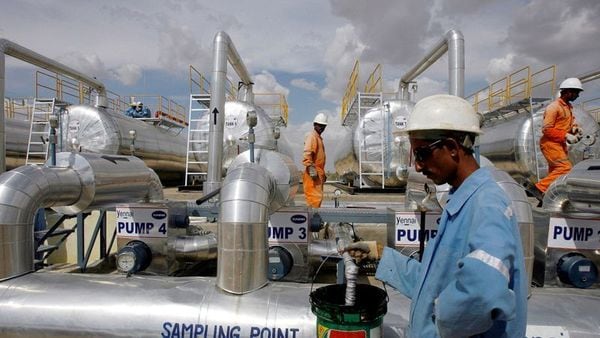 While the highly contagious Delta variant of the coronavirus is taking hold in many countries, prompting new lockdowns or movement restrictions from Australia to Portugal, hopes of a broader recovery in demand for fuel remained intact.

On the last day of June, Brent is heading for another monthly gain, which would mean the contract has risen for six out of the last seven months. US crude has traded similarly since November.

"Futures have been trading on a one-way ripper to the upside ever since the November 2 headline declaring a Covid-19 vaccine had been developed," said Bob Yawger, director of energy futures, at Mizuho Securities.

Crude stocks in the United States were down by 8.2 million barrels, American Petroleum Institute data showed, according to two sources, who spoke on condition of anonymity.

Still, petrol inventories rose by 2.4 million barrels and distillate stocks were up by 428,000 barrels, the sources said.

But hopes for a broad recovery received a boost from Mohammad Barkindo, Secretary-General of the Organization of the Petroleum Exporting Countries (OPEC), who said on Tuesday that demand is expected to rise by 6 million barrels per day (bpd) in 2021, with 5 million bpd of that coming in the second half of the year.

He laid out the forecast during a meeting of the Joint Technical Committee of OPEC+, an alliance made up of OPEC members along with Russia and other producers.

The meeting will decide on the group's production policy as it moves to release some of supplies it withheld from the market to support prices after the evaporation of demand in Covid-stricken 2020.

"Ultimately, much more OPEC+ supply will be needed to balance the oil market by 2022," Goldman Sachs analysts wrote in a note.

Goldman forecasts that demand will rise by an a further 2.2 million bpd by the end of 2020, leaving a 5 million bpd shortfall in supply.

U.N. Secretary-General Antonio Guterres has called on the US to lift or waive all sanctions on Iran as agreed under a 2015 deal to prevent Tehran from developing atomic weapons.

Indirect talks between the United States and Iran in recent weeks have not achieved a breakthrough to get Washington to return to the deal and lift sanctions.