Home Auto Reviews Ntorq 125 Review: it’s The Fastest Tvs Scooter To Go On Sale. Should You Buy One?

Ntorq 125 review: It’s the fastest TVS scooter to go on sale. Should you buy one?

TVS says the design of its latest 125cc scooter is inspired by a stealth aircraft’s design. It’s fuss-free, very well-rounded and a fun product that should appeal to lot of buyers.
By : Autocar
| Updated on: 24 Feb 2018, 08:55 AM 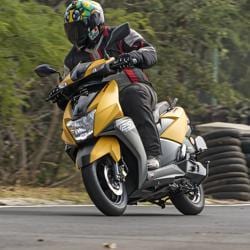 TVS says that the styling of the new 125cc scooter has been inspired by a stealth aircraft and that it can be seen in its sharp and angular lines.

With youngsters demanding faster and exciting scooters, manufacturers have been stepping up their game. The latest to get on this bandwagon is TVS, with its new Ntorq 125cc scooter. It is the first 125cc offering from TVS and we spend a day riding it at its test track in the TVS factory. 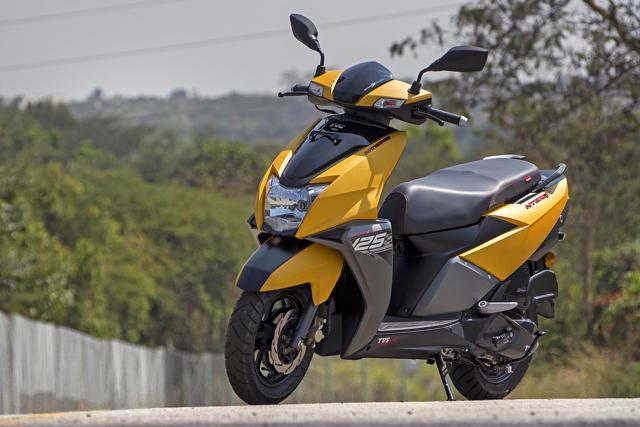 TVS says that the styling of the new 125cc scooter has been inspired by a stealth aircraft and that it can be seen in its sharp and angular lines. The raked-out apron comes fitted with a V-shaped headlamp. Sadly, it isn't an LED unit; but what you do get are LED DRLs. The tail section is interesting, to say the least. It features a T-shaped LED tail-lamp with a diffused effect, which looks unique. The faux-afterburner-style rear vents look cool, while the indicators have been neatly integrated. Although the faux-carbon-fibre finish on the plastic panels looks nice, it has been a little overused, I feel; while the subtle creases on the panels look great. The chunky split grab-rails not only look good but are also easy, to hold, as well as functional, as there's a slot available to pass bungee cords through. 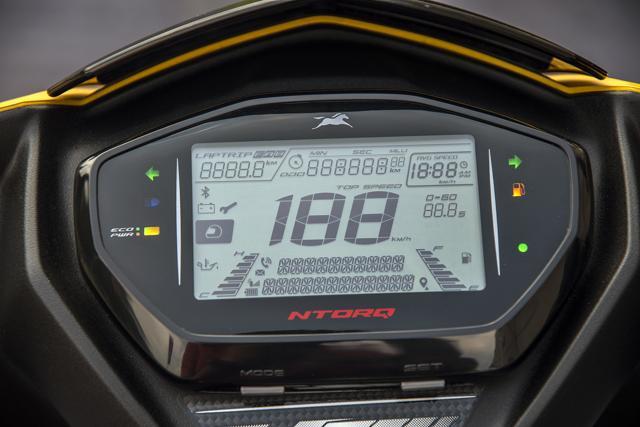 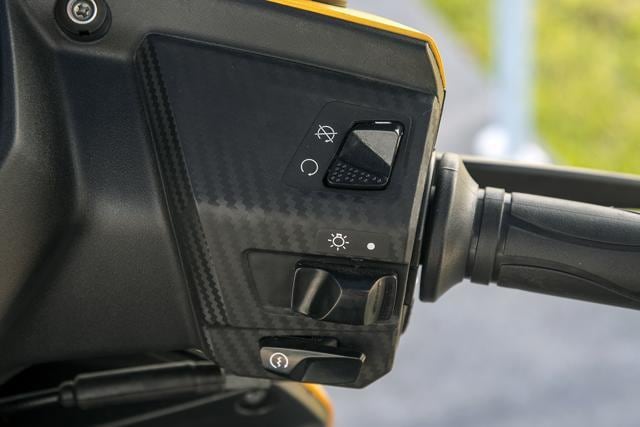 Other interesting details are the chunky exhaust muffler and the beautiful multi-spoke alloy wheels, finished in gloss black - but they don't have a diamond-cut finish, as claimed by TVS. The handlebar is a chunky unit and the silver-finish bar-ends are just cosmetic. It also gets a large, all-digital console but more on that, later. The Ntorq 125 is the first locally built scooter to feature an engine kill-switch. You also get other features like pass light switch, under-seat light, reserve fuel light, power and eco mode indicator, USB charger and parking brake. The new scooter also gets an external fuel-filler cap; but we would have liked it, if it could be unlocked via the conventional key slot. Despite having a generous 22-litre under-seat storage space, it can't accommodate a premium full-face helmet. Just like every other scooter, then.

In total, TVS claims that there are more than 30 parameters that can be displayed on the 5-inch console. The interesting bits are a lap timer, a 0-60kph acceleration recorder, a top speed recorder, engine temperature, average speed and service reminder. The Ntorq 125 also gets 'Smart Xonnect', which uses Bluetooth to sync the instrument console with your smart phone. Through the TVS Ntorq app, the rider can view various details like incoming call alerts, SMS alerts, missed call alerts, high speed alert, phone battery and signal strength, trip report and last parked location. The rider can also customise the app to send out an auto reply message when you're riding and also have the option of 'do not disturb'. TVS has also partnered with MapmyIndia to provide navigation assist, which relays directions on the console.

The first thing that you will notice about the new 125cc motor is its refinement. We were riding at speeds of around 70-80kph with hardly any vibrations for company. Only when you cross 90kph, do you feel a minor buzz from the foot board - and even that's negligible. TVS engineers should be lauded for their efforts, as the Ntorq's motor is a big step forward in terms of NVH, as compared to the TVS Jupiter's powerplant. Also, the engine gets 3-valve technology with two intake ports and one exhaust port. One of the intake valves is a swirl-type and the other is a tumble-type. This, according to TVS, has helped improve combustion efficiency, thereby improving mileage. 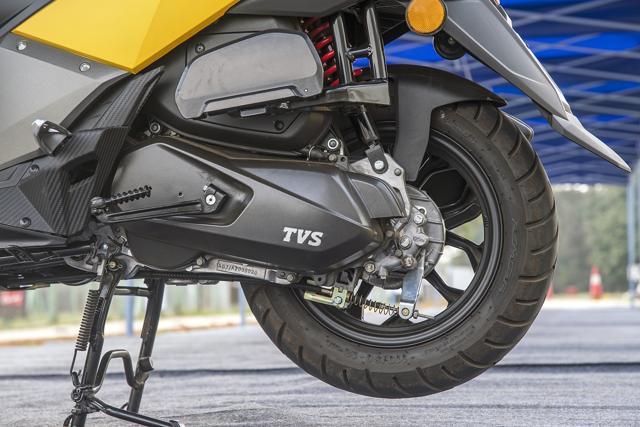 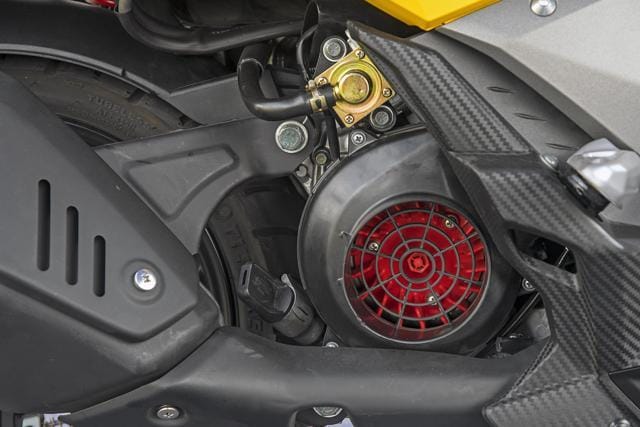 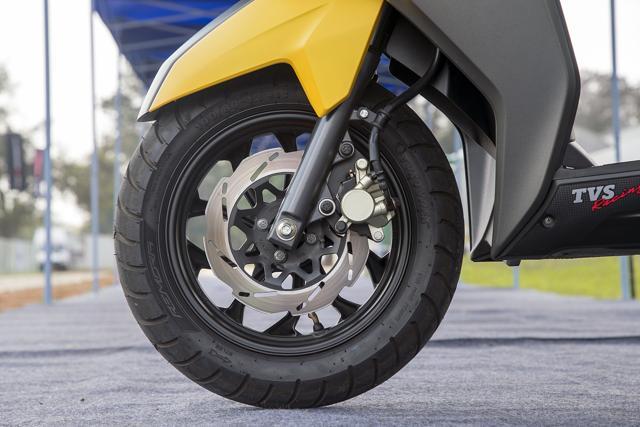 Although no claimed mileage figures have been announced, according to officials, it's at par with rivals (read Honda Grazia and Suzuki Access 125). We would have liked a bit of zing in acceleration off the line, though, as the Ntorq's initial throttle response lacks that urgency you'd expect from its sporty intentions - and it feels just like any other scooter. TVS claims a top speed of 95kph; given my hefty frame, I managed to clock 93kph (as the speedo indicated) - which isn't bad, by any means.

Despite employing plastic panels, the Ntorq weighs 116kg which is significantly higher than its rivals (Grazia - 107kg, Access 125 - 102kg). So does the extra mass make it dull around corners? Not at all! The bike's Handling dynamics are likeable and it feels planted around corners. It isn't overly sporty like the Aprilia SR 150; but it goes about its way in a fuss-free manner. The ride quality is just spot-on - it's not stiff, to make your journey uncomfortable, nor is it too soft, which would make it wallow while taking corners at high speed. Another element that TVS got right on the new scooter is the foam density of the saddle. Even after riding for almost an hour, the seat didn't 'sink' like that of the Jupiter. The Ntorq is also the only scooter to get petal disc brakes at the front, while the rear gets a drum unit. The disc brake offers a good bite and I was able to shed speeds without much effort. However, the rear does tend to step out, sometimes under hard braking. 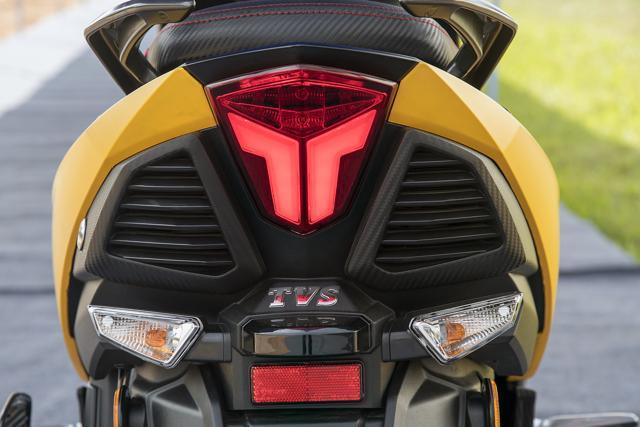 By now you would have figured out that we like the new TVS Ntorq 125. It's fuss-free, very well-rounded and a fun product that should appeal to lot of buyers. We were actually expecting more of a commitment to sportiness but TVS appears to have chosen a good balance of comfort and practicality instead. It has cleverly utilised technology to set a new benchmark for its rivals. SmartXonnect and the sporty styling will definitely please youngsters - who are the target audience for the scooter. What really sweetens the deal is its brilliant pricing of ₹58,750 (ex-showroom, Delhi) which is incredible value, no matter how you see it.