DCP Women's Protection Vrinda Shukla said that scooters have been deployed in areas with more women footfall.
By : PTI
| Updated on: 03 Aug 2020, 08:08 AM 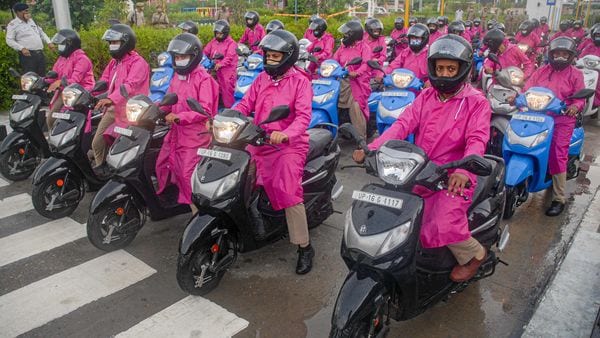 This all-female scooter-borne patrolling unit was launched with an aim to provide safety to women in Noida and Greater Noida.

The Gautam Buddh Nagar police on Saturday launched their new all-female scooter-borne patrolling units with an aim to provide safety to women in Noida and Greater Noida, officials said.

Fifty such units were flagged off on Saturday and a total of 100 scooters have been made available for the newly-crafted patrol unit. There would be one rider per scooter, which could be a police sub-inspector, a head constable or a constable.

The uniformed personnel will be equipped with a body-worn camera, a baton and "hidden arms and ammunition", as they go around crucial spots and road stretches in the district, the officials said.

"It's an initiative by Deputy Commissioner of Police (Women Safety) Vrinda Shukla. Her department has been coming up with initiatives on women safety in the past also which have shown positive results," Police Commissioner Alok Singh said.

"Today, 50 such units have been launched. The initiative has been done after adequate research. About 163 hotspots were identified across the district where women felt need for more police security. Route charts have been prepared accordingly for the patrolling units," he said.

Additional Commissioner of Police (Crime) Shriparna Ganguly and DCP Shukla, among other officers, were present during the launch of the all-women patrolling unit.

The district police chief said these personnel will carry batons and body-worn cameras along with "hidden" arms and ammunition.

Initially, these units will be deployed during daytime but depending on the feedback, changes can be made later both in terms of their duty timings and equipment, he added.

He said women safety has been a key focus area for the police commissionerate of Gautam Buddh Nagar ever since its inception in January this year.

The police have started initiatives like "mahila chaupal", set up dedicated units for women at each police station in the district and also started a family dispute resolution clinic for providing legal and mental counselling in cases of marital discord, he added.

According to the officials, feedback was taken from the public and NGOs working on women's issues over social media and through other medium before rolling the programme.