Nissan will start selling the Ariya electric SUV in US from next year to build on the success of Leaf compact electric car, which is now in its second generation.
By : HT Auto Desk
| Updated on: 10 Aug 2021, 10:18 AM 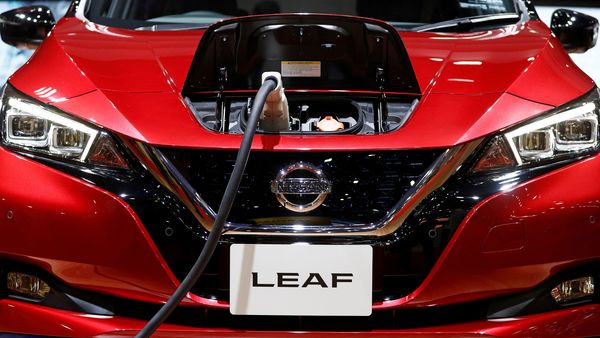 FILE PHOTO: A charging cable is attached to a Nissan Leaf electric car at the Tokyo Motor Show.

Nissan has itself an ambitious target to achieve more than 40 percent of its total car sales in US to be electric vehicles by 2030. Nissan Motor has already announced that it aims to achieve carbon neutrality across the company’s operations and the life cycle of its products by 2050.

According to Nissan's plans, every vehicle coming out of its facilities will be electrified by the early 2030s. Nissan had announced its intention to bring affordable electric vehicles to the masses around the world when Nissan launched the Leaf electric car in 2010.

“With Leaf, Nissan showed our pioneering spirit in electric vehicles. Now with more than a half-million pure EVs sold and more than 5 billion electric miles driven on roads around the world, we’re helping to lead the electric vehicle revolution," said Jeremie Papin, Chairperson, Nissan Americas. “Nissan is fully committed to doing our part toward building a cleaner, safer and more inclusive society for all," he added.

“It is critical to have industry and government working together to advance consumer adoption of EVs, as well as the manufacturing and infrastructure support to get the next-generation of electrified mobility on the road," said Papin. “First and foremost, we want more American consumers to enjoy the benefits of electrification: lower emissions, lower operating costs and a lot more fun behind the wheel."

Nissan recently announced that it will standardise and share electric-vehicle components with its French partner Renault. The two carmakers, along with Mitsubishi, will focus on sharing batteries, electric powertrains and electronic architecture. The carmakers also aims to adopt a uniform standard across the alliance through this effort.

Nissan will start selling the Ariya electric SUV in US from next year to build on the success of Leaf compact electric car, which is now in its second generation. Ariya electric SUV was unveiled last year by the carmaker and will be available in Europe and US, besides its domestic market.