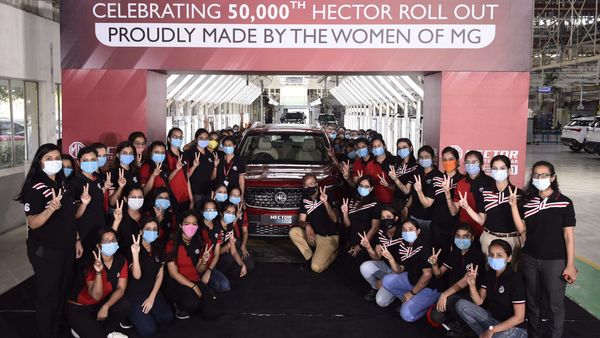 MG Motor India has reached a production milestone of 50,000 units.

MG Motor India on Thursday announced that it achieved a production milestone of 50,000 units of its popular Hector SUV from its Halol, Gujarat-based manufacturing plant.

The production of the 50,000th unit of the Hector was carried over by an all-women force. For the record, the MG's Halol plant has a leading 33% share of women in its workforce. As per MG, women-only teams were in the leading charge of the 50,000th Hector from its panel-pressing of sheet metal and welding to painting jobs as well as carrying out post-production test runs.

Speaking on the development, Rajeev Chaba, President & Managing Director, MG Motor India, said, “MG has always been a progressive brand with diversity, community, innovation, and experiences as our cornerstones. We believe that it is something that has broadened our perspective as a brand and unlocked efficiencies in every aspect of our business operations,"

MG Motor India said in a press note that aims to achieve 50% gender diversity in its organization in a bid to pave the way for a balanced workforce. It has also 'hired many female associates' in its manufacturing facility via various initiatives.

MG's state-of-the-art facility is equipped with modern infrastructure for vehicle manufacturing. It has Automated Guided Vehicles (AGV) and Robotic Process Automation (RPA) for various workshops. And the company says that its women workforce is active in all its departments.

"The rollout of our 50,000th Hector by an all-women crew comes as an honour to their contributions and hard work. It also demonstrates that glass ceilings no longer exist even in an erstwhile male-dominated industry such as automobile manufacturing. We believe that it will inspire more women to join the automotive industry in India and abroad," Chaba added.