Home Auto News Menace To Must: Rise Of The Humble E Rickshaws, A Triumph Of Local Ingenuity

Menace to must: Rise of the humble E-rickshaws, a triumph of local ingenuity

Initially reviled and considered a menace on the roads, these vehicles had to struggle to make their way in.In Delhi, Bihar, West Bengal, and Uttar Pradesh, though, they are a ubiquitous sight, proliferating near Metro stations and filling the last-mile gap for commuters.
By : mint_print
| Updated on: 06 Jan 2020, 03:48 PM 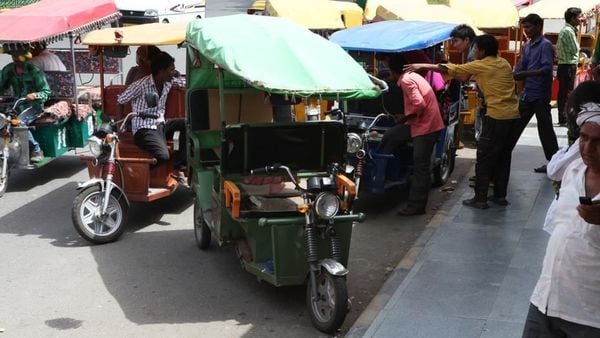 A silent revolution has been sweeping through many Indian cities, in the process creating a huge business opportunity. However, private equity and venture capital (VC), often credited with being the most astute spotters of new markets, seem to have missed this action. Perhaps the product segment isn’t upmarket enough or there isn’t a digital angle to it.

According to a study released by the Central Road Research Institute in 2017, 15 years after Metro services started in Delhi, the average Metro rider spent 40% of his or her commute time on the non-Metro part of the journey (basically getting to the Metro station and to the final destination), though it is just 20% of the total distance. That’s because no one thought through the last mile connectivity needs. The feeder bus network of the Delhi Metro Rail Corporation never really took off because of poor planning.

Enter the humble e-rickshaw, an entirely indigenous solution that shows the innate ingenuity and entrepreneurial instincts of Indians. Initially reviled and considered a menace on the roads, these vehicles had to struggle to make their way in. In 2014, the Delhi government even banned their plying and parking on 236 thoroughfares. Even today, despite their proven utility, they aren’t present in more than half the country, with most states in the west and south still to frame rules that would govern them.

In Delhi, Bihar, West Bengal, and Uttar Pradesh, though, they are a ubiquitous sight, proliferating near Metro stations and filling the last-mile gap for commuters.

Despite this, a business that’s growing 10-15% a year on an estimated base of 1.5-2 million units and is, after an amendment of the Motor Vehicles Act, being increasingly formalized, hasn’t been able to catch the fancy of VCs who are happy to throw money at other kinds of mobility solutions.

In July, Gurugram-based SmartE did raise ₹100 crore in fresh funding from Japan’s Mitsui & Co., while another startup Oye! Rickshaw has also found itself a set of individual investors. However, those are piffling amounts compared to the sums going into bike-sharing startups, for instance, which are paradoxically going nowhere. In India, bike-sharing startups raised around $138 million in funding in 2018, according to Tracxn. However, several such firms launched in recent years found the business unviable and have wound up operations.

The government, too, has been trying to push the bike-sharing concept, and attractively coloured bikes stacked neatly at select spots have now become a part of the street furniture in many cities. On the roads, though, they are much more difficult to spot, as hostile traffic conditions, lack of dedicated lanes and their inconvenience prevent any appreciable degree of usage.

Even if these issues are resolved, bikes, while being environment-friendly and a low-cost option, can only be a very small part of the overall transportation network. Hyderabad-based SmartBike, a public bike-sharing (PBS) company that has won exclusive mandates for setting up PBS systems in New Delhi, Chennai, and Hyderabad, has just 500 SmartBikes, each under operation in Delhi and Chennai.

For the future, too, the bursting of China’s bike-sharing bubble should be a cautionary tale for India. Foreign Policy magazine put it succinctly in an analysis in December 2018: “The rise and fall of the China bike craze played out like a sped-up version of every tech bubble, an unprofitable idea sustained by fantasy, false predictions, and the power of bigger firms."

Set against that sharp indictment, the value of e-rickshaws is immense. Here’s a business that has real revenues and profits. This is not a product in search of a market, but a solution for a real problem. They can travel deep into colonies through narrow lanes and are environmentally much friendlier than other forms of transport. They are extremely affordable too. It is almost as if, fed up of all the ill-fitting last-mile solutions, the market worked backwards to create the most efficient one.

So far, even our big vehicle producers, reeling from disappearing demand in their traditional markets, have been slow to respond, with the result that locally assembled vehicles based on imports from China have cornered 80-90% of the market.

A few months ago, battery maker Exide Industries announced plans to sell e-rickshaws using its lead acid batteries. It joins other mainstream players such as Mahindra Electric, Kinetic Green Energy & Power Solutions, and Hero Electric, who are now dipping their toes in this market.

Where big money won’t deign to go, social enterprises such as SMV Green Solutions have been happy to venture. The Varanasi-based non-profit organization, which won this year’s Ashden Award for sustainable energy solutions, helps manual rickshaw drivers upgrade to e-rickshaws, which boost their earnings and also mean a lot less sweat. With 10 million manual rickshaw drivers in the country, the potential upside is huge.

Earlier this month, in a belated recognition of their role, the government, through an amendment of the Motor Vehicle Act, relaxed the country’s norms for e-rickshaws and e-carts while affirming that they “provide affordable and clean last mile connectivity in the transport system".

There is a real fortune at the bottom of this pyramid, one that isn’t governed by gross merchandise volume and revenue multiples. The question is, is it glamorous enough for the big moneybags?