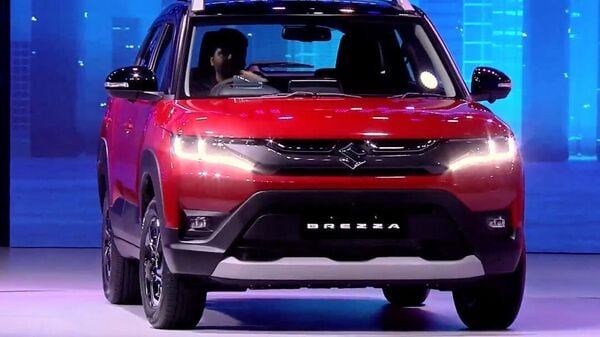 Maruti Suzuki is betting big on the newly launched 2022 Brezza SUV which has been priced from a starting range of ₹7.99 lakh.

Maruti Suzuki India is looking to ramp up its production volume across its three factories in the month of July, taking it to 22-month high, Hindustan Time's sister publication, Livemint reported. The move comes as the company is betting big on the sales of its sport utility vehicles as well as easing of supply chain issues that is helping increase production.

The country's largest automaker aims to produce about 180,000 units of vehicle including 11,000 units of the newly launched 2022 Brezza SUV at its two facilities in Gurgaon and Manesar, as well as at its contract manufacturer Suzuki Motor Gujarat in Ahmedabad, the report mentioned, citing sources. In June, the company manufactured 155,857 units while its sales volumes in May and June were almost flat.

The company is betting big on the newly launched 2022 Brezza SUV which can been priced in a range of ₹7.99 lakh to ₹13.96 lakh (both prices are ex-showroom). With this launch, the automaker aims to woo a younger car-buying audience that has been leaning in favour of sub-compact SUVs in recent times.

At present, Maruti Suzuki's presence in the SUV market is at sub-optimal levels, the company's executive director, Shashank Srivastava, told Livemint. With the new Brezza on the wings, the automaker hopes SUVs will help it recapture lost market share. At the end of March 2022, the company's market share was 43% as compared to nearly 47% in the year-ago period. “We have only two out of the 47 SUV models in the industry. We need to do better here to get to 50% market share," he said.

Speaking about the new Brezza, Srivastava said that the company is expecting the model to fare well in the market. “This model is the first offering in our upcoming vibrant SUV portfolio", Hisashi Takeuchi, managing director and CEO of Maruti Suzuki, said.