Last week, the government had extended the date for making FASTag mandatory for toll payments on national highways from December 15, instead of December 1.
By : PTI
| Updated on: 02 Dec 2019, 02:01 PM 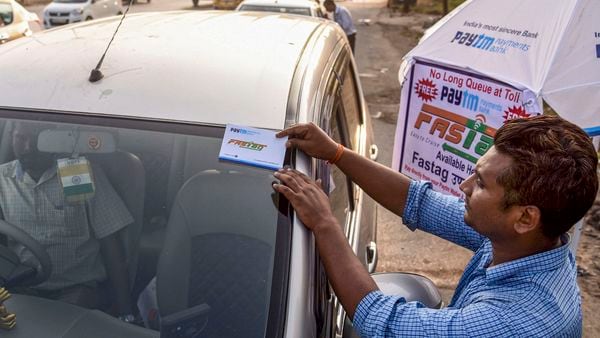 Navi Mumbai: A worker fixes a FASTag sticker on the windscreen of a car, at Vashi Toll Plaza on Sion Panvel Highway, Mumbai, Friday, Nov. 29, 2019. From Dec. 1, making toll payments via FASTag will become mandatory at national as well as state highways. (PTI Photo)

Auto industry body SIAM on Monday said mandating FASTags at toll plazas on all highways by the government from December 15 will improve overall transportation efficiency as there will be faster turnaround time for movement of goods and passengers.

Last week, the government had extended the date for making FASTag mandatory for toll payments on national highways from December 15, instead of December 1. It would charge double user fee from vehicles entering FASTag lane without FASTag from December 15.

"100 per cent implementation of FASTags would have several economic and environmental benefits in the road transportation sector with seamless movement through the toll plazas, thereby ensuring faster turnaround time for movement of goods and passengers and improving overall transportation efficiency," Society of Indian Automobile Manufacturers (SIAM) President Rajan Wadhera said in a statement.

SIAM said its members have been playing a crucial role along with the centre for the FASTags initiative in the last two years as a robust process at dealers' end has been established for fitment of FASTags for new passenger vehicles, buses and trucks sold from December 1, 2017.

"It is estimated that more than six million FASTags have been issued recently and this has also ensured growth in FASTags transactions at the Electronic Toll Plazas," SIAM said.

FASTag is a prepaid tag affixed on vehicle's windscreen that enables automatic deduction of toll charges and, lets the vehicle pass through the toll plaza without stopping for the cash transaction.