Mahindra Scorpio Classic is a revised version of previous generation Scorpio which sold in very good numbers for the manufacturer.
By : HT Auto Desk
| Updated on: 19 Aug 2022, 18:56 PM

Mahindra has made some cosmetic as well as mechanical upgrades to the SUV.

Mahindra has announced the prices of its new Scorpio Classic, it will be sold in just two variants. There is S which is priced at ₹11.99 lakhs (ex-showroom) and S11 which costs ₹15.49 lakhs (ex-showroom). It is important to note that these prices are introductory and Mahindra might increase the price in the future. Mahindra has not simply rebadged the previous generation of Scorpio. Instead, they have made some cosmetic as well as mechanical changes to the SUV.

The Scorpio Classic retains the original silhouette of the iconic Scorpio. But Mahindra has made some changes. For instance, the alloy wheels now get a diamond-cut finish, there is Mahindra's new twins-peak logo, a redesigned bumper and a new grille. At the rear, the black pillars above the tail lamps are now finished in red. The SUV is sold in five colour schemes. There is Red Rage, Napoli Black, Dsat Silver, Pearl White and a newly introduced Galaxy Grey. 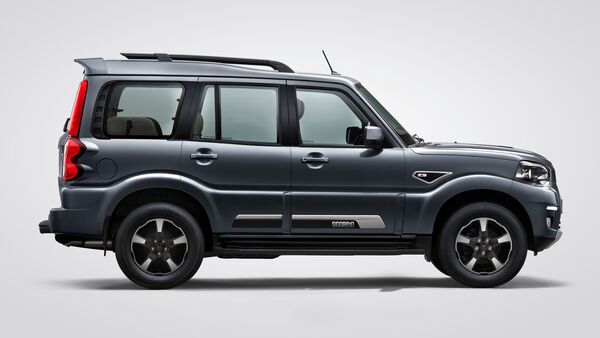 The Scorpio Classic will stay on sale alongside the Scorpio N.

Inside the cabin, there is a new 9-inch touchscreen infotainment system that runs on Android. It also supports screen mirroring. The dashboard now gets wooden inserts and the cabin is finished in a black and beige combination. The steering wheel now gets a leatherette finish and piano-black inserts. The seats are also new. They are made up of fabric but get new patterns.

Mechanically, the engine is now built out of aluminium. This helps in saving weight, the new engine is 55 kgs lighter than the previous one. It is still a 2.2-litre diesel engine but now it produces 132 Ps of max power and 300 Nm of peak torque. It comes mated to a cable shift 6-speed transmission that should have shorter throws than the previous one.

There are also some upgrades to the suspension setup. Mahindra has added MTV-CL dampers to all four struts. This should help in body control and the suspension itself has been retuned. The manufacturer also worked on the steering system so that it is easy to manoeuvre and control.

Now you can buy Ather 450X Gen3 through Flipkart