During his match-winning knock in Dublin, O'Brien's massive six landed outside the ground and smashed the rear window of his car.
By : HT Auto Desk
| Updated on: 28 Aug 2020, 03:36 PM 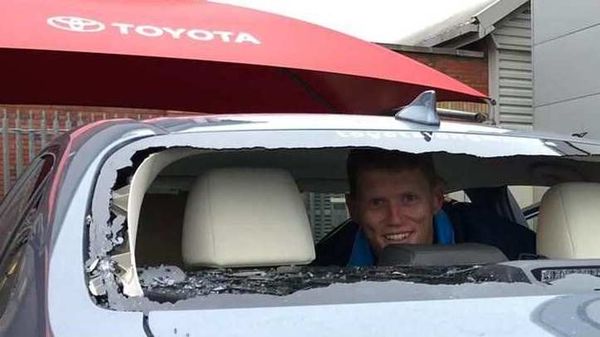 Irish cricketer Kevin O'Brien is known for his hard-hitting ability. He holds the records for the fastest century in World Cups against England, for which he faced merely 50 balls. But he has added another feather to his list of feats: Smashing his own car with a six!

The incident happened during a match between Leinster Lightning and North West Warriors in Dublin. Characteristically, O’Brien was bulldozing his way to another quick-fire century, when one of his hits landed outside the ground and, unfortunately, on his own car parked outside. He later posted pictures on Twitter to show the aftermath.

The pictures show that the ball had hit the rear window on his grey Toyota Corolla Hybrid sedan. A major portion of the rear screen had been smashed on impact. Ireland's cricket board also shared the images on their social handle.

Coincidentally, Kevin O'Brien is also the brand ambassador of Toyota Motor. And that somewhat helped him to get the window fixed without paying a buck at the service station.

Toyota shared the update on their social media handle, calling O'Brien their 'smashing brand ambassador'. They also assured a quick service to get a new rear window for his car without any worry. O’Brien apologised to Toyota for the incident and assured that he will park his car far away from the ground next time.

Didn’t need the air-con on the drive up to you lads. 🤣 unreal service once again. Never fails to disappoint. I’ll park further away next time 😝 #BestInTheBusiness https://t.co/tNKTG0tRLA

O'Brien went on to score 82 runs off 37 balls, helping his side Leinster Lightning secure a 24-run victory, as well as the Man of the Match award for himself.