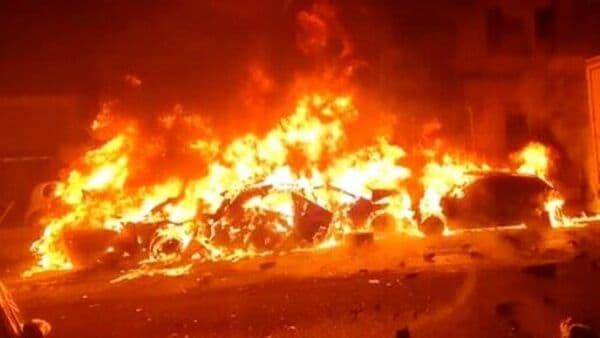 Burning cars stand on a street in Fuerth, Germany, after an intoxicated truck driver rammed his vehicle into parked cars.

A truck recently ran a red light signal and rammed straight into a number of vehicles in south German town of Fuerth, near Nuremberg. Such was the impact of the collision that a number of the vehicles were pushed violently into the walls of buildings on either side of the road and in all, there were around 31 cars that bore the brunt of the incident.

Associated Press reported that the driver of the truck was under the influence of alcohol. Referring to a police statement, the report mentions that the driver first jumped the traffic signal and hit a car at the crossroads. Instead of stopping though, the driver continued ahead. Apart from severely damaging several vehicles - some even bursting into flames, the truck itself caught fire.

The driver,  a 50-year-old Turkish citizen, was immediately arrested and the entire matter is being further investigated. A breath alcohol test, however, already confirmed that the accused was heavily intoxicated. Fortunately though, only the driver of the truck and another driver in one of the damaged vehicles received some injuries and no fatalities were reported.