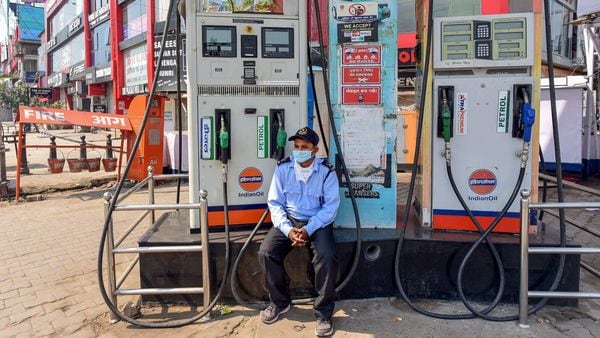 File photo of a petrol pump used for representational purpose only

India's fuel demand dragged lower in July, posting its fifth consecutive year-on-year decline, government data showed on Tuesday as a spike in coronavirus cases and floods in many parts of the country restricted economic activity.

Consumption of refined fuels, a proxy for oil demand, fell to 15.68 million tonnes in July, 11.7% lower compared with a year earlier and 3.5% below the prior month, data from the Petroleum Planning and Analysis Cell (PPAC) of the Ministry of Petroleum & Natural Gas showed.

Diesel consumption, which accounts for about two-fifths of India's overall fuel usage and is widely used for transportation as well as for the country's irrigation needs, fell to 5.52 million tonnes last month from 6.31 million tonnes in June.

On an annual basis, demand for diesel declined about 19.3%.

Demand for fuel was also impacted as higher retail prices dented demand in the world's third-biggest oil consumer and as virus cases continue to explode.

With over 2 million people infected with the novel coronavirus, India stands third with the most cases after the United States and Brazil.

In addition, heavy rains and floods have affected millions of people and battered industrial and construction activity in some Indian states.

India's top refiner, Indian Oil Corp, said last month it would continue to operate its refineries below capacity in 2020/21, and that it didn't see a recovery in demand to pre-Covid levels "in the near future."

Fuel consumption in India nearly halved in April as a nation-wide lockdown to curb the outbreak halted economic activity and travel.

Sales of bitumen, used for making roads, slipped 4.4% on an annual basis and about 45% month-on-month.