Home Auto News Hyundai To Focus On Evs, Scale Down Production Of Ice Vehicles By Half: Reports

Hyundai to focus on EVs, scale down production of ICE vehicles by half: Reports

Hyundai aims to gradually expand battery EV offerings in key markets such as the United States, Europe and China with a goal for full electrification by 2040.
By : HT Auto Desk
| Updated on: 27 May 2021, 01:28 PM 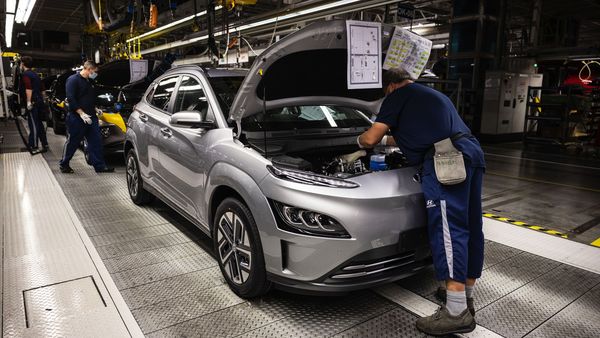 File photo of a Kona electric SUV on the final assembly line at a Hyundai Motor plant.

Korean vehicle manufacturer Hyundai Motor is aiming to drastically cut down on cars based on fossil fuels in coming days. According to a report shared by news agency Reuters, sources close the company have confirmed that Hyundai wants to save its funds and resources to invest more in electric vehicles.

Hyundai has already revealed its EV roadmap earlier saying that it wants to achieve full electrification and sell only electric cars by 2040. It is also speeding up its efforts to adopt hydrogen fuel cell vehicles as an alternative to the conventional internal combustion engine (ICE) vehicles around the world.

Reuters quoted one of the sources close to the Hyundai Group as saying, "It is an important business move, which first and foremost allows the release of R&D resources to focus on the rest: electric motors, batteries, fuel cells."

The move aims to reduce production of ICE vehicles drastically to almost 50 per cent of its capacity. The carmaker offers Kona electric and the Ioniq range of models as fully electric vehicles from its stable. It also plans to produce electric cars in the US in collaboration with its Korean sibling Kia.

Hyundai has revealed that its aims to increase the number of all-electric cars in the market and sell one million battery electric vehicles by 2025. Hyundai Motor Group, which includes Hyundai Motor, Kia and luxury car brand Genesis, aims to achieve a 10% share of the global EV market.

This massive push towards electric mobility and EVs will be a major decision for Hyundai. Together with Kia and Genesis, the Hyundai Group is one of the world's top vehicle manufacturing giants. It has some of the widest range of engines and some of the best transmission technologies currently available in the industry.

According to one of the sources quoted by Reuters, Hyundai is likely to finalise the move to switch to all electric models within the next six months.

The fact that Hyundai is serious about moving towards electric cars can be realised from the fact that it now offers charging for free for its US customers who buy the Ioniq 5 electric vehicle. Though the offer is for two years, the company has larger plans, including measuring up to EV giants like Tesla, in one of the biggest auto markets in the world.

Hyundai also aims to benefit from US President Joe Biden's push towards electric mobility. Hyundai is looking at the opportunity of being one of the carmakers to take benefit of the US government's plans to replace 650,000 vehicles in its fleets with electric cars.

Earlier this year, Hyundai had announced that it will reduce the number of gasoline models in China to 14 from 21 by 2025, while launching new electric models every year starting in 2022.