Residents are getting old bikes spruced up or buying new ones to compensate for canceled Pilates classes and closed gyms while delivery men stop by to get brakes or gears fixed.
By : AFP
| Updated on: 15 Apr 2020, 05:42 PM 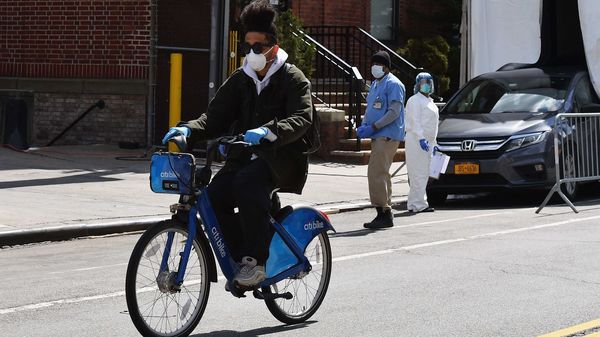 A man rides a Citi Bike past the Brooklyn Hospital in New York City.

When America's oldest bike shop opened, the Spanish flu was ravaging New York. More than a century later, it's helping residents work and stay sane as cycling takes on a vital role during the coronavirus pandemic.

While almost all stores were ordered to close for the Big Apple's Covid-19 shutdown, bike shops like Bellitte Bicycles were deemed essential businesses and allowed to stay open.

They have proven a godsend for New Yorkers needing to commute to hospitals, migrant workers delivering takeouts and cooped-up residents desperate to escape their cramped apartments for some solitary exercise.

"Business has been good but it's also about serving the community," said co-owner Sal Bellitte, whose grandfather opened the shop, situated in the Jamaica area of Queens, in 1918.

As inhabitants skip buses and subway trains due to social distancing and enjoy streets devoid of usual traffic, bike shops are one of the few businesses doing a decent trade.

"Business is booming," said 29-year-old Paris Correa, who recently started working at Bike Stop, another outlet in Queens. "I was hired because the owner knew it was going to be crazy."

Residents are getting old bikes spruced up or buying new ones to compensate for canceled Pilates classes and closed gyms while delivery men stop by to get brakes or gears fixed.

Bellitte Bicycles is the oldest continuously owned bike shop in the United States, according to Bellitte, who is the third generation of his family to own the store.

(Also read: Why this city is promoting cycles to beat Covid-19)

It opened the year a flu pandemic killed about 30,000 New Yorkers, operated during the Great Depression, World War Two, the 9/11 attacks and Hurricane Sandy, which caused devastation in 2012.

"We've seen it all. The coronavirus pandemic is like coming full circle," Bellitte, 56, told AFP, adding that he thinks this is the worst crisis yet "because of the uncertainty."

For many workers, New York's shutdown, which Governor Andrew Cuomo extended until April 29, has made them rely on a bicycle for the first time.

Oliver Bucknor -- 50 years old and originally from the Caribbean island of Jamaica -- lost his job as a van driver when the deadly outbreak started spreading across the city early last month.

He bought an old bike from his landlord for $250 and brought it into Bellitte's for a tune-up before embarking on a new job delivering food.

"A bike is a lifeline for a lot of people," he told AFP. "It allows me to keep making a living."

Other residents are making use of Citi Bikes, New York's popular bicycle share scheme, which the government has temporarily made free to overwhelmed health care staff.

Emily Rogers, a 27-year-old social worker, started cycling the half-hour to and from the public hospital where she works on a Citi Bike after she became concerned about using the subway.

"It's nice to be outside for a little bit and not feel guilty about it," Rogers told AFP, adding that she'll probably stick with cycling once New York reopens.

Citi Bike has expanded the cleaning of its bikes. Staff placed at popular docking stations disinfect the two-wheelers when they are returned by customers.

Rides increased as the virus first started to cause concern but they fell once residents were ordered to work from home later in March.

During the lockdown, the most popular docks have switched from being outside train and bus stations to near hospitals, suggesting medical staff and relatives visiting Covid-19 patients are relying on Citi Bikes.

- Lone riders -"This is not a normal ridership pattern," a Citi Bikes spokesperson told AFP.

For other New Yorkers, cycling is a way to stay healthy and kill the boredom of a weeks-long lockdown, even if it means pedalling without friends.

Robin Lester-Kenton, 41, needed to get her sons -- aged seven and five -- out of the house and has been taking advantage of an empty basketball court in Brooklyn to teach them how to cycle.

"There is nothing like a magical open space right now," she told AFP.

Doom and gloom abounds too, though, as the coronavirus cripples bike tour companies, with operations halted due to the ban on social gathering and an absence of tourists.

"Last year we were all celebrating and going out for steak dinners. This year it's like we're all trying to figure out food stamps," he said.

Back at Bellitte Bicycles, Bellitte says it will stay open for as long as they remain healthy themselves.

"If one of our guys shows symptoms we'll have to close."