Amazon has built up a fleet of 30,000 last-mile delivery trucks and vans since creating its own delivery network in 2018, and currently handles about half of its own deliveries.
By : Bloomberg
| Updated on: 21 Dec 2019, 01:04 PM 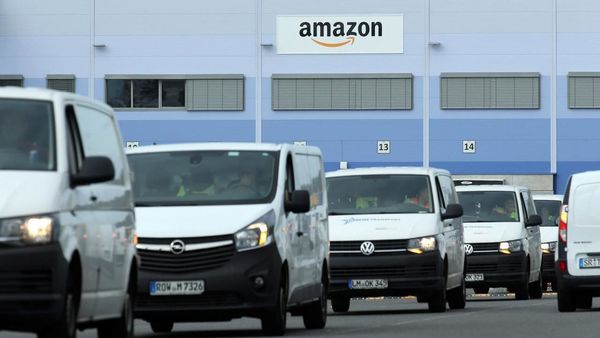 The Amazon.com Inc. vans parked outside apartment buildings and along suburban cul de sacs aren’t just bearing gifts to online shoppers this holiday season. The e-commerce giant’s home-delivery push has been a boon to automakers, too.

Amazon has built up a fleet of 30,000 last-mile delivery trucks and vans since creating its own delivery network in 2018, and currently handles about half of its own deliveries. That’s good news for manufacturers of increasingly ubiquitous gray vans with the blue swoosh, which include Daimler AG’s Mercedes-Benz, Fiat Chrysler Automobiles NV and Ford Motor Co.

Carmakers have been coping with declining demand from consumers this year in part by boosting deliveries to commercial customers including Amazon and its delivery contractors. Sales to fleets, including rental-car companies and governments, are on pace for a record year, having already exceeded 2.6 million units through November, according to Cox Automotive.

“A lot of those vans are going to build out Amazon’s small-package delivery in metro areas," said Evan Armstrong, president of Armstrong & Associates, a Milwaukee-based logistics research and consulting firm. “There’s going to be an opportunity because e-commerce is growing so fast, and these networks are growing as well."

Armstrong estimates that e-commerce logistics costs in the U.S. have grown 19% this year to $168 billion, about half of which is spending on transportation. Commercial vehicle sales totaled more than 734,000 through November of this year, an 8.7% increase from the same period a year ago, according to Cox.

Amazon, which long relied on the U.S. Postal Service, United Parcel Service Inc. and FedEx Corp. for shipments, has increasingly made door-to-door deliveries on its own. The Seattle-based company has outsourced much of the work to an army of independent contractors and used its bulk buying power to secure better prices on their vehicles, fuel and insurance. It now has more than 800 delivery contractors in its last-mile network employing 75,000 U.S. drivers.

Earlier this week, Amazon told third-party merchants they could no longer use FedEx for holiday season ground delivery, saying the company’s performance had been slipping. Amazon won’t say how much of its deliveries it’s now handling through its own network, but the ratio will likely rise to 70% next year, according to SJ Consulting Group.

Automakers are loath to break out their sales to a single customer like Amazon, but Fiat Chrysler -- which sells Ram ProMaster vans to Amazon, UPS and the USPS -- delivered more than 51,000 vans through September. That was up 25% from a year earlier and put its vans on pace for the best year since at least 2014.

Ford, which sells Transit cargo vans to Amazon, had record van sales in the third quarter, while General Motors Co.’s full-size van fleet sales were up 8.3% through October, due in large part to demand from online sellers and delivery companies.

Van deliveries at Mercedes-Benz are up 2.9% this year, after a 9.1% gain in 2018. The German automaker announced last year that Amazon had ordered 20,000 Sprinter vans built at its new plant in North Charleston, South Carolina.

Amazon also has announced plans to order 100,000 battery-powered delivery vans from Rivian Automotive Inc., an electric car-making venture it purchased a stake in earlier this year. The first of those battery-powered vans will hit the road in 2021.

The rise of Amazon’s branded fleet has also been a boon for auto dealers who repair and service these vehicles. “We’re seeing a lot of increase in servicing activity due to Amazon and other retailers," said Steve Germain, owner of a dealer group with Mercedes and Ford stores in Florida, Michigan and Ohio. “It’s important for them to get back in service as soon as possible, so it’s great business for us."

The tax cuts President Donald Trump signed into law in late 2017 have been another tailwind for commercial vehicle sales.

Benefits under the law, which begin to phase out in 2022, double the amount of depreciation cost companies can claim for the first year of vehicle ownership -- to as much as 100% in some cases. That makes it easier to buy the vehicles, which start at around $30,000.

While the tax reform and stepped-up competition for parcel deliveries has goosed fleet sales, it’s unclear how much longer this segment of the industry will be able to buoy the broader U.S. auto market. Dealers expect to sell fewer than 17 million new cars and trucks in 2020 after a five-year run above that threshold.

“We think that’s changing the economics of fleet ownership, not only for rental companies, but delivery and service companies," said Charlie Chesbrough, senior economist at Cox. “A big question hanging over 2020 is, after two years of strong fleet, is there more upside potential, or have we tapped that out?"