Honda’s new Amaze is built on an all-new platform and is a leap forward overall. Can the new Amaze take the fight to the segment-ruling Suzuki Dzire? We review the second generation compact sedan to find out if it is better than the competition and its earlier iteration.
By : Autocar
| Updated on: 05 May 2018, 09:12 AM 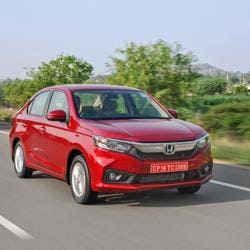 New Honda Amaze review: The design of the new Amaze is quite striking and nothing like the previous car’s.

The new Amaze isn't just a Brio with a boot, but a fresh, all-new compact sedan. The second-generation Amaze is built on an all-new platform, which will be a base for future models. It has grown - the Amaze is longer, wider and taller than the outgoing car, while the wheelbase is a significant 65mm longer than before. Overall, the design of the new Amaze is quite striking and nothing like the previous car's. The buff and vertical nose looks quite unconventional and could split opinion, but what works to make the Amaze look wider than it is, is the thick, signature chrome grille bar and the stretched, flat bonnet. The sides are a lot cleaner and get a single character line which looks neat but not quite as distinctive as the prominent two slashes across the earlier Amaze's flanks. 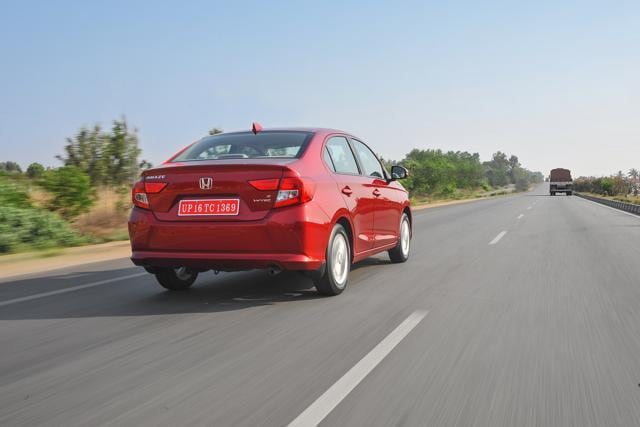 Walk around the car to the rear and you'll notice that the Amaze is significantly different and looks premium - its chunky C-shaped tail- lamps give it a mini-Civic appearance. Like before, there's a 90hp, 1.2-litre, four-cylinder petrol and a 100hp, 1.5-litre, four-cylinder diesel engine, mated to either a five-speed manual or an automatic (CVT). The diesel-CVT makes 20 percent less power compared to the manual, and this has been done to keep preserve the life of the transmission as well as ensure smoother performance. In addition, Honda has made several enhancements to improve efficiency, as well as reduce the vibrations and harshness levels in the diesel. Honda's 100hp, 1,498cc, four-cylinder diesel behaves just like before, and remains very responsive to accelerator inputs. Power builds in a very linear manner, and although the boost comes in at around 1,800rpm, there's ample power available even below that - so those used to shifting-up early in diesels won't have to deal with delayed power delivery. Even at high revs, this engine doesn't sound unrefined. While the diesel drone is still present in the cabin, that rattling from the engine is eliminated. The five-speed manual gearbox is one of the best in the business with short and precise throws, while the clutch is light to use. The talking point of this new Amaze is the diesel CVT that's a segment first and a first for Honda too. Power and torque have been reduced by 20 percent to 80hp and 160Nm, but the good news is that the Amaze doesn't drive like it's got such a deficit. In fact, off the line, you'd be hard-pressed to feel the reduced power. The CVT works brilliantly and complements this engine's responsive nature very nicely. Performance is brisk and effortless, as the CVT keeps the engine spinning right in the meat of its powerband. It works very smoothly and even when driven aggressively. Despite being down on power compared to the manual, there wasn't a point where the Amaze diesel felt short-changed. Yes, there is a bit of that rubber band effect, and the engine does drone when you've got it wound up to max revs, but the minute you ease off, the CVT lets the engine revs drop down to let the Amaze cruise happily and without fuss.

The petrol is the familiar 90hp, 1.2-litre engine and there's hardly any change in the way it drives. As long as you're gentle with the accelerator, the engine rewards users with smooth and refined performance in the city. Unfortunately, the weak mid-range of this engine is also carried over, which calls for frequent gear changes. However, like most Honda petrols, this 1.2 motor, too, loves to be revved. Although the five-speed manual is easy to drive, there's also a CVT option, which works seamlessly in the city. However, when driven hard, it holds the revs at higher RPMs, making the engine feel a bit stressed, and this becomes more pronounced when the car is loaded with passengers and luggage. The petrol CVT also gets paddleshifters. 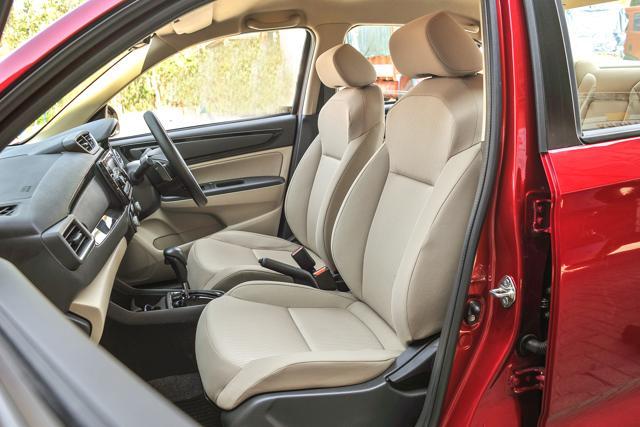 Ride comfort is one of the key strengths of this Amaze. It handles rough roads very capably and doesn't toss around passengers on broken roads. Body movements are very well controlled too. If there was one concern though, it was that, with four passengers and luggage, the rear of the car bottoms out (just like the older Civic) on speed breakers, as a result of the soft rear suspension and long wheelbase. The steering has a bit of vagueness around the centre position, but it remains well-weighted and precise as the speeds build. Overall stability is fantastic, and the new Amaze has a secure, planted feel of a bigger car. This new-gen Amaze isn't just grown up on the outside; it's a significant step up on the inside too - be it space or appeal. The two-tone dashboard might seem a bit busy with lots of design elements, but, more importantly, offers a big jump in the quality. The plastics though not 'soft-touch' are nicely textured and have a premium feel. Certain bits like the steering controls, climate control knobs and buttons are superbly finished, and the meaty steering wheel is great to grip. A huge improvement here is the front seats, which now get adjustable neck restraints and high-quality fabrics. The redesigned seats are well-contoured and offer good support. In fact, it's safe to say that these are amongst the comfiest seats in a compact sedan. The touchscreen is smooth to operate, and it is easy to navigate through the various menus, but the hard buttons on the side are too tiny and feel flimsy to operate. Also, we wish Honda offered a good old-fashioned rotary knob for the volume. The Amaze comes with both Apple CarPlay and Android Auto in addition to satellite navigation, which is now de rigueur in today's competitive market. The back seat is very comfortable with a comfy recline angle and ample thigh support. Legroom is huge too for a car of this size, and because the front seatbacks are scooped in, knee room is ample. Although the new Amaze misses out on rear air-con vents, the air-con compressor has been upgraded to larger capacity units, and yes, it cools the cabin very rapidly. In terms of equipment though, the top variants feature cruise control, keyless entry/go, tilt steering adjustment, touchscreen infotainment system, climate control and the petrol-automatic gets paddleshifters. Safety kit like ABS, EBD, dual airbags and Isofix child seat mounts on the rear seat are standard across the range. What's nice is that there are several well-shaped storage areas across the cabin, including bottle holders in the doors. The boot is now larger by 20 litres, taking the total cargo capacity to 420 litres, which is segment-best.

When it comes to refinement, ride quality and overall space and comfort, Honda has truly stepped up its game with this new car. The ace up its sleeve is the diesel-CVT, which performs remarkably well, and combines convenience and efficiency like no other automatic. The downside is that the diesel-CVT won't be available in the top VX variant, so the touchscreen is something you'll have to make do without. Can the new Amaze take the fight to the segment-ruling Suzuki Dzire? No doubt, it offers a lot more, but will that all come at a price? Honda knows it has to be priced competitively to lure customers away from its rivals, and that's what it's likely to do. Finally, there's a strong alternative to the Dzire.