The situation may worsen next week as the protesting farmers threatened to intensify their agitation and block more roads if the government did not accept their demand.
By :
| Updated on: 05 Dec 2020, 04:31 PM 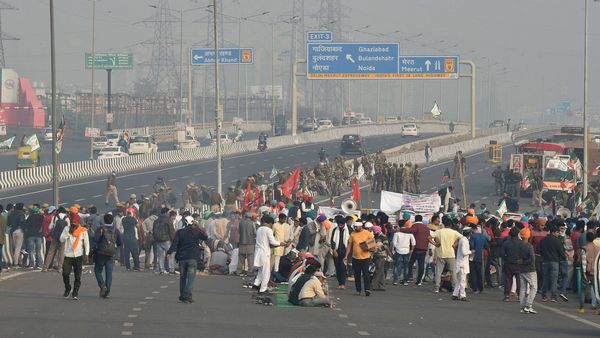 Traffic moved bumper to bumper on key routes in Delhi on Saturday as thousands of protesting farmers stayed put at the national capital's borders with Haryana and Uttar Pradesh for the 10th day on the trot.

The Delhi Traffic Police took to Twitter to inform commuters about the closure of Singhu, Lampur, Auchandi, Safiabad, Piao Maniyari, and Saboli borders. It also said that National Highway-44 was closed on both sides.

However, if anyone needs to commute towards Harayana, they can go via Dhansa, Daurala, Kapashera, Rajokri National Highway-8, Bijwasan/Bajghera, Palam Vihar and Dundahera Borders, the traffic police said.

"The Chilla border on Noida link road is closed for traffic from Noida to Delhi due to farmers’ protests near Gautam Budh Dwar. People are advised to avoid Noida link road for coming to Delhi and use DND," it said in a tweet.

Since the Ghazipur border on National Highway-24 is closed for traffic due to the protests, the police advised commuters coming from Ghaziabad to Delhi to use the Apsara or Bhopra borders or the Delhi-Noida Direct expressway.