According to the Delhi Traffic Police, vehicle movement remained affected at Sarai Kale Khan, near World Health Organisation, Ashram, and ITO due to waterlogging.
By : PTI
| Updated on: 22 Jul 2020, 08:33 AM 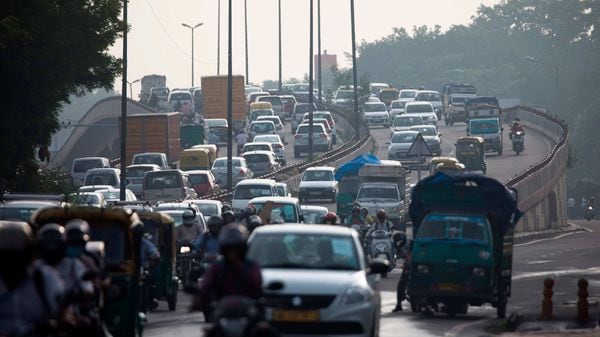 Commuters make their way after work during a rush hour after a monsoon rainfall in Delhi.

Residents shared pictures and videos of rainwater gushing into their houses and vehicles wading through waterlogged areas.

According to the Delhi Traffic Police, vehicle movement remained affected at Sarai Kale Khan, near World Health Organisation, Ashram, and ITO due to waterlogging.

Rain and gusty winds uprooted 10 trees in the district.

Rainfall recorded below 15mm is considered light, between 15 and 64.5 mm is moderate, and above 64.5mm is heavy, according to the IMD.

The monsoon though is also running through the region. These two factors together led to moderate to heavy rains in Delhi-NCR, they said.

Earlier, the India Meteorological Department had predicted isolated heavy to very heavy rains in Delhi and neighbouring areas on Tuesday and Wednesday.

"The rainfall intensity and distribution are very likely to decrease significantly thereafter," the IMD had said.

Kuldeep Srivastava, the head of the regional forecasting centre of the India Meteorological Department, said light rains are likely in Delhi till Wednesday morning. Thereafter, isolated light rainfall is predicted for two to three days.

The Safdarjung Observatory has recorded 127.2 mm rainfall against the normal of 129 mm in July so far.

On Sunday, at least four people died as heavy rains lashed the city, inundating low-lying areas and bringing traffic to a standstill on important road stretches.