Lithium-ion batteries, which form the core of most electric vehicles available in India, attract a Goods and Services Tax (GST) of 18 percent. It is the price of batteries that usually keeps the overall cost of an EV high.
By : HT Auto Desk
| Updated on: 09 Jun 2022, 09:00 AM 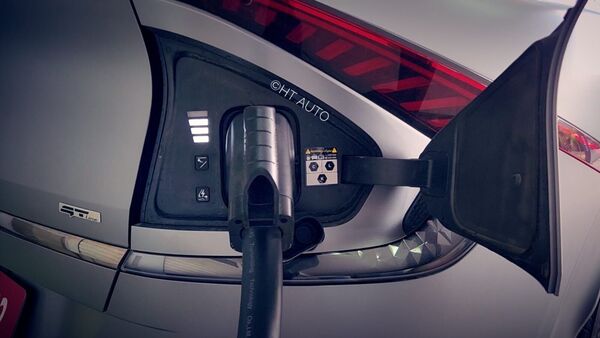 GST Council may soon bring the tax rate of lithium-ion batteries at par with electric vehicles.

Electric vehicles in India, which has seen unprecedented growth over the last couple of years, may soon become more affordable. According to reports, the Goods and Services Tax (GST) Council may bring down tax rate on the lithium-ion battery, which is one of the most expensive components inside an electric vehicle. The Council may reduce GST on the EV batteries at par with electric vehicles. This could mean a major drop in overall price of electric cars and two-wheelers in India.

According to a report published by Mint, talks have started among stakeholders at the Centre to go ahead with the plan. A meeting was held on Tuesday to discuss battery-swapping policy between members from NITI Aayog, ministries of new and renewable energy, heavy industries, and other government departments. Suggestions were moved rationalise tax and standardise EV batteries. NITI Aayog is preparing a draft policy which will be sent to the GST Council for further consideration.

The draft policy sent by NITI Aayog reads, “As per the current GST regime, tax rates on lithium-ion batteries and electric vehicle supply equipment (EVSE) are 18% and 5%, respectively. The GST Council, the decision-making body on GST provisions, may consider reducing the differential across the two tax rates. The council will take an appropriate decision in this regard at a suitable time."

Currently, lithium-ion batteries attract a GST of 18 percent, whereas the overall cost of an electric vehicle in India attracts a GST of 5 percent. The rate of GST on EV batteries was higher before 2018. It used to attract 28 percent, which was reduced to the current rate by the GST Council four years ago.

The cost of an EV battery is anywhere between 25 percent to 35 percent of the overall cost of an electric vehicle. The reduction of GST on the EV batteries will also help in buying EVs more affordable.

The move, if implemented, will also help India in taking one step forward to project itself as the future global hub for EVs. Recently, Tesla had tried and failed to move the Centre to reduce import tariff on electric cars in India. Tesla finally dropped its plans to launch EVs in India. Several other carmakers have also raised the issue of high taxes hampering EV growth in India.