Brian Latouf, a 26-year GM veteran who left to become Hyundai’s chief safety officer, violated non-compete agreements with the move, GM said in a lawsuit.
By : Bloomberg
| Updated on: 18 Dec 2019, 09:33 AM 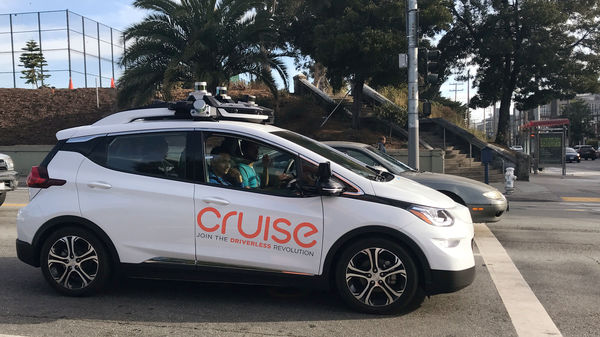 FILE PHOTO: A Cruise self-driving car, which is owned by General Motors Corp, is seen outside the company’s headquarters in San Francisco.

General Motors Co. accused Hyundai Motor Co.‘s U.S. unit of poaching one of its top safety executives so it could gain access to trade secrets for self-driving vehicles and electric cars.

Latouf’s departure comes as GM is pushing to come up with advanced safety features for its new models and working with Cruise LLC, the self-driving car startup that is majority-owned by the automaker, to get in the race to develop autonomous vehicles. Earlier this month, Hyundai officials vowed to spend about $17 billion over the next six years to switch to electric and autonomous vehicles.

Closely held technology tied to self-driving cars has generated a spate of litigation recently, ensnaring tech firms such as Alphabet Inc., Uber Technologies Inc., Tesla Inc. and Apple Inc. In several of those cases, employees who defected to other companies were accused of stealing or misappropriating advances in self-driving technology.

The blossoming rivalry in the electric-car market -- with hundreds of billions of dollars at stake -- has automakers seeking any edge and makes them even more likely to sue to protect their innovations, lawyers say.

“Hyundai has taken all necessary steps to ensure that information is protected and is not used in Brian’s new role," Michael Stewart, a spokesman for Hyundai Motor America, said in an emailed statement. Jim Cain, a GM spokesman, declined to comment on the suit.

GM’s lawyers are asking a Delaware Chancery Court judge to temporarily bar Latouf from working for Hyundai and forbid the South Korean carmaker from using any of GM’s confidential information or trade secrets he brought with him, according to court filings.

Latouf is still bound by GM’s code of conduct, which prohibits him from sharing any of that confidential or proprietary information, the company said. His decision to defect to Hyundai in November also violates several non-compete agreements that bar him for working for a competitor for a year, GM said.

GM’s probe of its former executive found he’d transferred company information from a GM laptop to unregistered USB storage devices in violation of company policy, according to the suit.

Latouf’s new job at Hyundai is “substantially similar" to his role at GM, his former employer claims. “Given the incredible similarity between his job at Hyundai and the position he held at GM, it is without question that he will use confidential, proprietary, and trade-secret information he learned at GM for Hyundai’s benefit," the company said.

GM’s lawyers notified Hyundai and Latouf that he was violating his employment pact. Latouf and his new employer sued in state court in California earlier this month, challenging the restrictions on the executive.