Carmakers and parts suppliers in the country, which employ nearly 800,000 Germans, were spending heavily on electric cars.Auto production had plunged 97% in April and has yet to recover to pre-pandemic levels.
By : Bloomberg
| Updated on: 18 Nov 2020, 08:18 AM 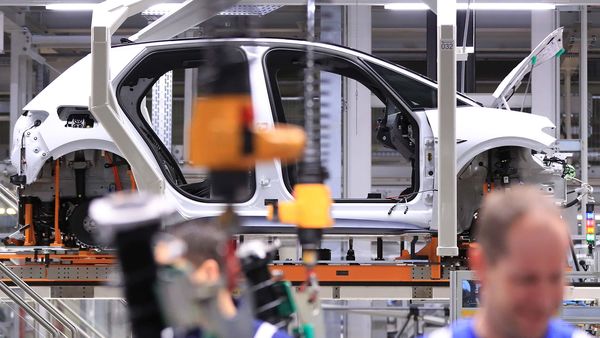 File photo for representational purpose: A Volkswagen AG (VW) ID.3 electric automobile hangs from a cradle on the assembly line at the automaker's factory in Zwickau, Germany.

Carmakers and parts suppliers in the country, which employ nearly 800,000 Germans, were spending heavily on electric cars. That left companies exposed to the sudden drop in demand from the fallout of the coronavirus -- auto production plunged 97% in April and has yet to recover to pre-pandemic levels.

Chancellor Angela Merkel will host a meeting with senior auto executives on Tuesday to hash out a way to give the sector a helping hand in the transition to the electric era. Proposals on the table include an extension of cash bonuses for purchasing electric-powered vehicles beyond 2021 and expanding the country’s spotty charging network. The package to subsidize the development and production of climate-friendly cars could total an additional 1 billion euros ($1.2 billion), Reuters reported.

Additionally, a controversial plan for direct financial aid for ailing component makers will also be discussed. The proposal risks igniting tensions within Merkel’s coalition over state involvement in the economy.

Germany’s carmakers, once world leaders in automotive innovation, have been playing catch up on electric cars. Volkswagen AG, Daimler AG and BMW AG combined are valued at less than half of Tesla Inc., which is building a factory just outside Berlin to challenge the German car giants on their home turf.

The struggles extend to hundreds of parts makers -- companies often specialized in combustion engines components and with fewer resources than big carmakers. Even big suppliers like Continental AG are suffering. Europe’s second-largest parts maker has widened cuts this year and last week forecast that profitability will shrink for the fourth time in five years.

Merkel’s allies in Bavaria -- the home of BMW and Volkswagen’s Audi as well as parts maker Schaeffler AG often lobbies on behalf of the auto industry -- wants a cash-for-clunkers plan to renew the fleet of trucks, as well as a state-subsidized synthetic fuel research program.

“I expect us to make decisions that serve both climate protection and job security in the automotive industry," said Alexander Dobrindt, caucus leader for the Bavarian sister party of Merkel’s Christian Democratic Union.

The Christian Social Union wants hybrid cars to remain included in the e-car bonus scheme. The demand faces stiff opposition from the environment ministry because of their carbon emissions. As part of the stimulus plan launched earlier this year in response to the pandemic, Merkel had already ignored the industry’s pleas to apply bonuses to cars with combustion engines.

Yet the most difficult task of the evening may well be to find a solution for troubled suppliers.

A proposal by the IG Metall labor union would have the government take a stake in a public-private fund to help the companies in their electic transformation by providing funds for research, new equipment and retraining employees. But many legislators in Merkel’s bloc are balking at the plan.

One alternative to direct aid would be for the government to issue financial guarantees for the fund, according to a person with direct knowledge of the discussions, who asked not to be identified because the talks are private.