German auto sales slumped by a fifth in August, erasing headway made during the previous month.BMW and Continental have announced job cuts and Volkswagen reduced its dividend after losing 2.4 billion euros.
By : Bloomberg
| Updated on: 09 Sep 2020, 11:27 AM 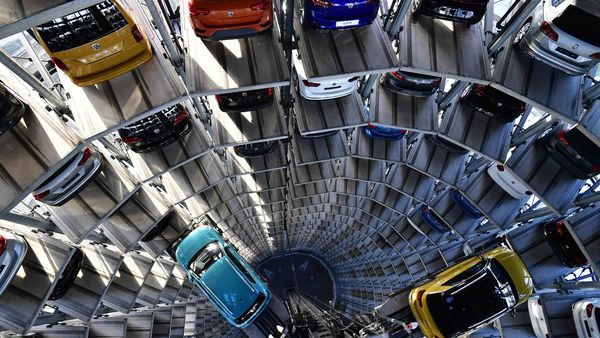 The number of electric vehicles available is limited and there are combustion-engine models on the market that are relatively clean in terms of air pollution, according to Transport Minister Andreas Scheuer. Merkel is due to chair talks later on Tuesday between government officials, regional leaders and auto executives on the future of the industry.

“We are talking about a key German technology and many, many jobs and families depend on it," Scheuer, a member of the CSU, the Bavarian sister-party to Merkel’s CDU, said in an interview with DLF radio. Another senior CSU official, Alexander Dobrindt, said he doesn’t expect any decision on subsidies Tuesday, but that one is needed before the end of the year.

Merkel’s ruling coalition is divided over the need for a purchasing incentive for combustion cars, with Scheuer’s party arguing in favour and others insisting that the focus should be on promoting electric vehicles. Merkel last week said that she’s aware of the CSU’s position but sees no need to expand the government’s stimulus package for the time being.

Germany has already sought to lift car sales by introducing purchasing subsidies of as much as 9,000 euros ($10,600) per electric vehicle.

Scheuer, who will attend Tuesday’s “car summit," said more government support is needed to help both carmakers and parts suppliers. The industry is mired in its worst crisis in decades just as it faces pressure to invest in new technology as the combustion era draws to a close and car-sharing services gnaw at demand.

Companies including BMW AG and Continental AG have announced job cuts and Volkswagen AG reduced its dividend after losing 2.4 billion euros in the second quarter when the pandemic shuttered factories and showrooms.

German auto sales slumped by a fifth in August, erasing headway made during the previous month and damping hopes for a rapid recovery in Europe’s largest economy. Germany’s VDA car lobby expects a 25% drop in domestic auto production this year after output through July collapsed to the lowest level since 1975.

“All the aid that we have provided so far, such as wage support and much more, is having a positive effect but this crisis will be with us for a long time," Scheuer said. “When Germany’s car industry is in crisis then that also has an impact on the rest of Europe, also in terms of competitiveness with the U.S. and Asia."

European Competition Commissioner Margrethe Vestager was quoted as saying Tuesday that companies should focus on innovation rather than rely on government aid.

Vestager wants to foster cooperation between the bloc’s carmakers to help them cope with the transformation to new technologies, she said in an interview with Germany’s Handelsblatt newspaper.

“We are discussing with car associations how manufacturers can work together on technological change without affecting competition," Vestager told the paper. “I think this is doable."

Bavaria Premier Markus Soeder, who heads the CSU and will also take part in Tuesday’s meeting in Berlin, said it can be debated whether it’s better to provide state subsidies for the auto industry from a special fund or to create incentives for individual products.

“But what is clear is that in the end we have do something to support these many jobs in a key part of our manufacturing sector," Soeder said in an interview with ZDF television.