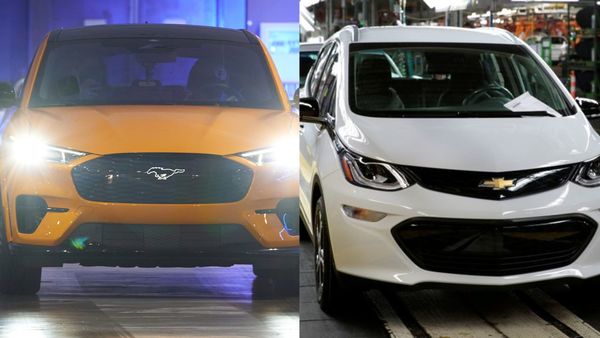 Ford Motor Company is all set to surpass General Motors (GM) in terms of sales of electric vehicles this year, as per a recent research study by Morgan Stanley. The research compares EV sales by Ford through the first ten months of this year with that of GM, while also keeping in mind the latter’s halt of Bolt  EV production.

The Morgan Stanley study cites data from Motor Intelligence published in October which revealed that Ford had sold 21,703 units of its all-electric Mustang Mach-E through the first ten months of the fiscal year. The data also highlighted that during that same period, GM sold a combined 24,810 units of the Chevy Bolt. However, only seven units of the Bolt EVs were delivered to customers most recently, which is also the only GM BEV currently available to customers.

The reason behind the less number of deliveries of Bolt EVs is that GM is in the midst of a major recall for the vehicles due to a potential battery fire risk tied to over 140,000 vehicles. Thus, the carmaker has decided to forego Bolt EV production for the remaining of this year.

The Morgan Stanley report states that if there are no more sales of the Chevy Bolt for the remaining of the year, and if the Mustang Mach-E repeats its October selling rate of 2,848 units for the remaining duration, this would put Ford’s total FY21 EV sales at 27,399 units as compared to GM at 24,810 units.

However, the report does not take account of the deliveries of the GMC Hummer EV sales that are expected to begin in December. However, the assumption is that it is unlikely for GM to sell over 3,000 units of the limited-run Edition 1 in the first month itself. Thus, Ford seems to have ample window to play catch-up.