Ford builds its most advanced factory to make electric truck

Robots will collaborate with humans as Ford is spending $700 million to overhaul its Rouge complex in a bid to maintain decades of dominance in the pickup segment.
By : Bloomberg
| Updated on: 18 Sep 2020, 08:53 AM 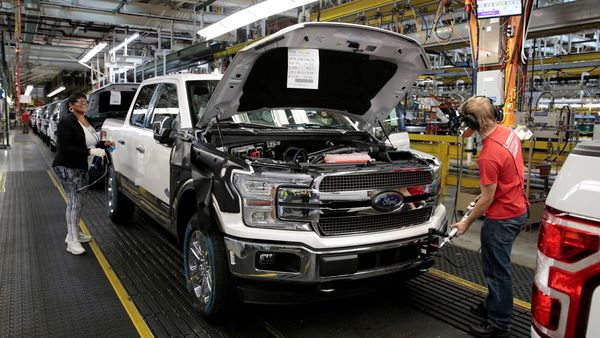 File photo of a 2018 F150 pick-up truck at Ford's Dearborn Truck Plant in Dearborn, Michigan. (This image has been used for representational purpose only)

The plant is going up inside Ford’s 92-year-old Rouge complex in Dearborn, Michigan, and will be the “most advanced facility we’ve got in the world," manufacturing chief Gary Johnson told reporters in a briefing Wednesday. The autonomous sleds will transport truck bodies from one station to the next, while robots help assemble the vehicles. The factory is scheduled to be completed next summer and begin building prototype electric F-150s.

Ford is spending $700 million to overhaul its Rouge complex as it wages a pitched battle to maintain decades of dominance in the pickup segment. Today it began building a redesigned version of its gasoline-fueled F-150, the company’s biggest money maker. Though it sold almost 900,000 F-Series trucks last year, Ford is playing catch-up with more recently revamped versions of its primary rivals: Fiat Chrysler Automobiles NV’s Ram and General Motors Co.’s Chevrolet Silverado.

The second-largest U.S. automaker also is seeking to stake a substantial claim to the emerging market for electric trucks, which has seen a rash of new entrants, including Tesla Inc.’s Cybertruck, Rivian Automotive Inc.’s R1T and Nikola Corp.’s Badger.

Ford said its electric truck, set to go on sale in 2022, will be the fastest and most powerful pickup it has ever produced. The automaker cast its competitors as “lifestyle trucks," saying the electric F-150 will double as a mobile generator capable of powering a job site or the driver’s home.

“This isn’t a gimmick," Chief Operating Officer and future CEO Jim Farley was scheduled to say during a ceremony at the Rouge on Thursday. “It’s a workhorse, not a showhorse destined for a shiny garage filled with four other luxury cars."

Ford has invested more than a half-billion dollars in one of those new rivals: Rivian. The automaker is jointly developing an electric vehicle with the startup founded by R.J. Scaringe.

“We really like R.J. and what he’s doing because he’s standing up product, great product, commercial and retail," Farley told reporters after introducing the new F-150 on Thursday. “But our relationship is much broader. Don’t think of it as a transactional relationship for a vehicle. It’s a strategic investment."

The automaker’s research found “very substantial demand" that “focused on the work customer," Kumar Galhotra, Ford’s president of the Americas and international markets, told reporters on Wednesday. “It was enough for us to make this investment both in the product as well as the factory."

The new 500,000 square-foot Rouge Electric Vehicle center will create 300 new jobs and also produce a gasoline-electric hybrid version of the F-150 that will go on sale sooner than the electric truck.

The two electrified models represent the future of the F-Series, according to the automaker.

“It sets the Rouge up with a long-term vision with new technology and battery-electric products with our most important vehicle," Johnson said.