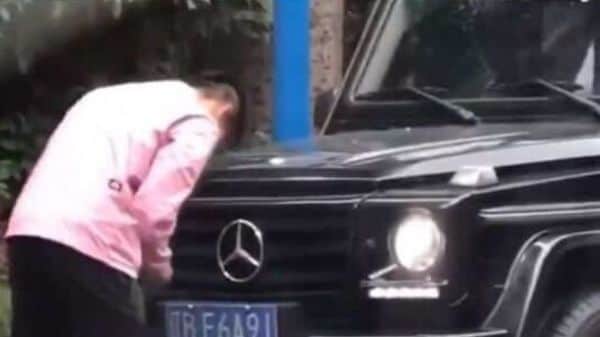 The video purportedly showing Yu Hanchao changing the number plate on his car has gone viral in China. (Screengrab from video posted on Weibo)

A Chinese footballer has been in the eye of a raging controversy after a video footage emerged purportedly showing him switching the number plate on his Mercedes. Yu Hanchao has been sacked by his team Guangzhou Evergrande and may face even stricter action at a time when China has been implementing car rationing policies in many cities to limit traffic amid Covid-19 scare.

While the reason why Hanchao switched the number plate on his Mercedes from 'E' to 'F' has not been established, it is being widely speculated that he did so to avoid vehicle rationing policy in place. A video of him in the act has gone viral on Chinese social media site Weibo.#EvergrandesackedYu has also been trending on the Twitter-like Chinese site.

It is reported that while Hanchao has been sacked by his team, he also faces 15-day prison term for his act, if his guilt is proven.

Hanchao is a prominent face in Chinese football and has represented the national team in 50 international matches as well. It has been quite a fall from grace for him since reports of him changing the number plate emerged. While many have slammed the footballer and said he has brought a bad name to the sport in the country, there have been a few who have rushed to his defence. This includes Hanchao's teammates Hao Haidong, the highest goalscorer for China ever. He said that the sacking from Guangzhou Evergrande was an extremely harsh decision and that 'players cannot be treated like tools.' Others have said that forgiveness is the best act in such a case.

Those slamming the footballer, however, say that icons in the country are now above rules and must adhere to everything that any other citizen is expected and bound to abide by.