The decision to arrest ex-Nissan boss Carlos Ghosn four times in a row so as to extend his detention was fundamentally unfair, the UNHRC’s Working Group on Arbitrary Detention said in a report.
By : Bloomberg
| Updated on: 23 Nov 2020, 18:30 PM

Carlos Ghosn’s detention for almost 130 days in a Japanese jail was neither necessary nor reasonable and violated the former Nissan Motor Co. chairman’s human rights, a UN panel concluded in a harsh critique of Tokyo prosecutors who led the case against him.

The decision to arrest Ghosn four times in a row so as to extend his detention was “fundamentally unfair," the United Nations Human Rights Council’s Working Group on Arbitrary Detention said in a report Monday posted on its website. The panel said that it would refer the case to the UN’s rapporteur on torture, cruel and other inhuman or degrading treatment.

“The repeated arrest of Mr. Ghosn appears to be an abuse of process intended to ensure that he remained in custody," the panel said, pointing out that on at least two occasions he was arrested for the same alleged crime, only for a different time period. “This revolving pattern of detention was an extrajudicial abuse of process that can have no legal basis under international law."

Ghosn and former Nissan director Greg Kelly were arrested in Tokyo on Nov. 19, 2018, and accused of underreporting the former chairman’s compensation. Both have denied wrongdoing. Additional charges were filed later accusing Ghosn of using company assets improperly, which he has also denied.

Ghosn made a daring escape from Japan to Lebanon hidden inside a large box aboard a private jet in late December. It was, Ghosn argued defiantly in Beirut later, the only way for him to avoid what he called trumped-up charges of financial misdeeds concocted with the help of his former Nissan colleagues. His arrest and removal as chairman of Nissan, Renault SA and Mitsubishi Motors Corp. shook the foundations of the automaking alliance he built and triggered management and operational turmoil. 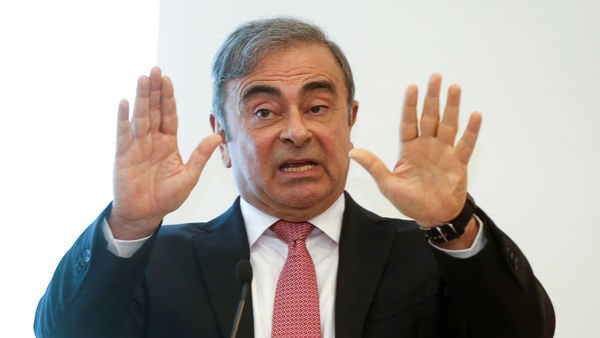 While Ghosn is unlikely to ever face trial or detention in Japan, the report could be relevant for several ongoing legal proceedings related to the former auto executive. The most immediate potential impact may be on the impending extradition from the U.S. of former Green Beret Michael Taylor and his son Peter, who are sought by Japanese prosecutors for their role in helping Ghosn escape the country.

The UN group’s report is another embarrassing setback for the Japanese government, which was caught off guard when Ghosn slipped surveillance and fled the country.

Although Japanese prosecutors typically win 99% of their cases, mostly through confessions obtained during detention, the country has insisted that it has a proper legal system that doesn’t ignore human rights, rejecting accusations that it practices “hostage justice." In 2019, French President Emmanuel Macron told then-Japanese Prime Minister Shinzo Abe that he felt Ghosn’s detention was “too long and too hard."

“We welcome a courageous decision from an independent and respected authority, that undeniably establishes Mr. Ghosn’s detention was arbitrary, he was denied his right to impartial justice, and his treatment was unfair and degrading." his lawyers, Francois Zimeray and Jessica Finelle, said in a statement.

A representative for Nissan declined to comment. There was no answer to a call to the Tokyo Public Prosecutor’s Office on Monday, a public holiday in Japan.

The Japanese government “insists that the prosecution has acted impartially throughout the proceedings against Mr. Ghosn," the UN panel said in the report, based on exchanges it had with Japanese authorities.

The UN group also concluded that his fourth, early-morning arrest surrounded by paparazzi and his appearance in handcuffs and waist retentions, denied him the right to a fair trial because it made him look like a dangerous criminal. Lastly, the panel said, he was regularly subject to daily, five-hour interrogation sessions while his conversations with his lawyers were non-confidential and limited to 30 minutes, denying him the right to a proper defense.

To be sure, the UN panel said its conclusions on his detention weren’t a comment on his escape from Japan and “should not be construed as condoning or offering any justification for such a departure."

The UN panel is the same one which said WikiLeaks founder Julian Assange’s rights had been violated during his seven-year stay at Ecuador’s embassy in London because he faced arrest by police if he left the premises, an opinion criticized by lawyers.

Ghosn still has a lawsuit against Nissan for 15 million euros ($18 million) as part of a Dutch wrongful dismissal lawsuit over his firing. Nissan has counter-sued in Japan for 10 billion yen ($96 million) in damages, seeking to recover what it alleges were monetary damages inflicted on the company by Ghosn “as a result of years of his misconduct and fraudulent activity."

What may change both suits is the UN’s own bold decision to both urge an independent investigation into the circumstances of Ghosn’s detention and recommend his right to sue for damages.

“Taking into account all the circumstances of the case, the appropriate remedy would be to accord Mr. Ghosn an enforceable right to compensation and other reparations, in accordance with international law," the panel said.